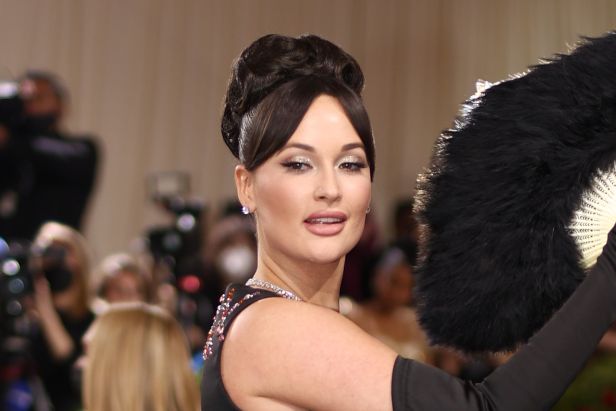 Kacey Musgraves arrived to the 2022 Met Gala tonight in New York in a black and glitzy Prada gown.

The theme of this year’s gala is “In America: An Anthology of Fashion.” It’s showcasing 100 garments from independent designers that were created from the 1800s to the mid-late 1900s. Held at the Metropolitan Museum of Art, the stars all ascend a grandiose red carpet that sweeps over the museum’s entrance.

Musgraves wore a black floor-length dress from Prada, styled by Erica Cloud. It features an A-line waist and a plunging neckline that is accented by a bow at the center of the chest. The gown has a short train and features embroidered iridescent rhinestones in firework formations all over.

The artist accessorized with a giant black-feathered fan. The dress is paired with black satin gloves that come up over the elbow, on top of which Musgraves is donned a diamond bracelet. She’s also wearing a stunning collar-style diamond necklace that features clear, yellow, and pink diamonds, as well as large diamond studs.

Musgraves’ hair is pulled into a large bun reminiscent of Audrey Hepburn, and she’s wearing a clean makeup look with a deep pink lip, glittery shadow, and cat eyeliner.

Check out the night’s hosts for the 2022 Met Gala.