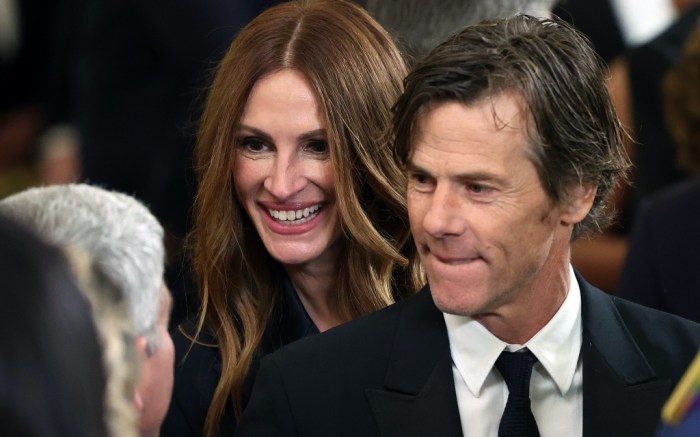 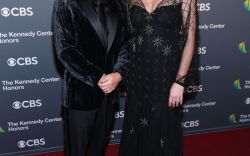 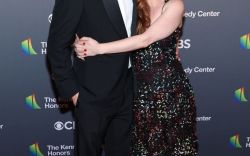 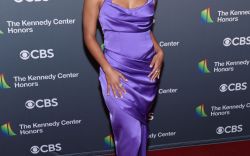 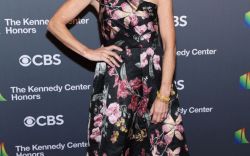 Julia Roberts paid a whimsical tribute to George Clooney while in Washington for this year’s Kennedy Center Honors.

Arriving to the Kennedy Center Opera House, Roberts was wittingly captured on Instagram by stylist Elizabeth Stewart in a Moschino gown. The “Eat Pray Love” star wore a custom design by Jeremy Scott for the occasion, paying tribute to friend George Clooney — one of the evening’s honorees — with numerous prints of his face in gilded portrait frames. The humorous piece was complete with a black long-sleeved blazer, and accessorized with Chopard jewelry.

When it came to footwear, Roberts’ shoes could not be seen. However, she was later revealed to wear a set of Sole Bliss’ Remy platform heels. Her $325 set featured shiny gold 1.25-inch platform soles with wide upper straps for additional security. Completing the suede and reptilian-embossed set were thick 5-inch block heels, giving her a dynamic height boost throughout the evening.

Height-boosting heels have become synonymous with Roberts’ style in recent months, from wearing the same Sole Bliss platforms in black at the “Ticket to Paradise” premiere to Thom Browne’s Oxford pumps she donned at SeriousFun’s New York City Gala.

PHOTOS: Discover star arrivals at the 2022 Kennedy Center Honors in the gallery.