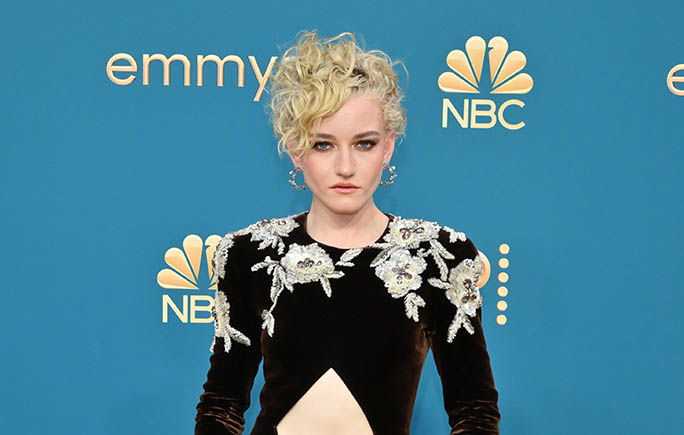 Julia Garner turned the 2022 Emmy Awards red carpet into a high-fashion runway. The annual event is being held at the Microsoft Theater in Los Angeles tonight and will be hosted by Kenan Thompson. Garner won the award for Outstanding Supporting Actress in a Drama Series for her role in the Netflix’s “Ozark.”

Garner embodied glamour as she arrived with her husband Mark Foster in a floral-embellished, velvet Gucci sheath dress. The garment had a round neckline, slightly pointed shoulders and a diamond stomach cutout at the center.

Adding an extra dose of edge to her look, the “Inventing Anna” star styled her short blond hair in messy curls and accessorized with spiky Swarovski hoop earrings.

When it came down to shoes, Garner elevated her ensemble with nude platform sandals. The heels had a chunky stacked outsole and small slits on the instep. The platform shoe trend is one of the easiest styles to incorporate into any wardrobe. Post-pandemic, platform shoes have emerged as one of the most popular footwear styles. The dramatic heel easily adds flair to any outfit.

Garner’s husband Mark Foster looked sharp in a black tuxedo, which he paired with a bow tie and white button-down shirt. Foster completed his look with black leather loafers.

The 2022 Emmy Awards celebrates the top performances and programs in television. This year’s ceremony, held at the Microsoft Theater in Los Angeles, will be hosted by Cedric the Entertainer. HBO’s “Succession” is leading the annual event’s 2022 nominations with 25 nominations, followed by “Ted Lasso” (20), “The White Lotus” (20), “Hacks” (17) and “Only Murders in the Building” (17).

PHOTOS: Discover more celebrity arrivals on the red carpet at the 2022 Emmy Awards.