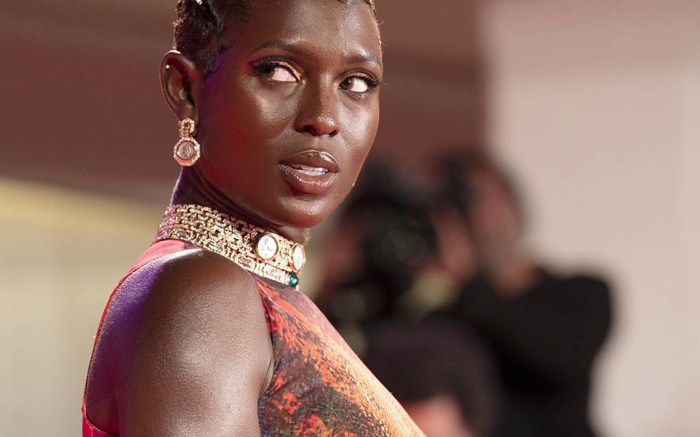 Jodie Turner-Smith hit the red carpet at the 79th Venice International Film Festival in Venice, Italy, joined by a multitude of stars for the premiere of “Bardo.” The British actress has certainly made waves with her presence on the carpet, turning up in impossibly beautiful ensembles day after day. Smith’s outfit on Sept. 1 was no exception, the “White Noise” actress clad in a Christopher John Rodgers gown in a wide array of neon hues.

Fitted with a high neckline, the dress was sleeveless and lengthy, pooling around the model’s feet while the fabric was splattered and streaked with every color of the rainbow, indicative of Christopher John Rodgers’ eye-catching design style. For accessories, held a baby blue clutch with a sparkling diamond butterfly clasp that mimicked the shine in the gold chain chokers she’d worn dotted with stones of every kind. The NAACP award winner was dripping in gold, the star sporting dangling gold earrings and a plethora of sparkling rings. The hem of Smith’s dress was larger than life, the vibrant cascading fabric hiding away her yellow Jimmy Choo “Maelie” sandals, which peek out from time to time.

“Bardo” is a three hour Mexican epic comedy film co-written, produced and directed by Alejandro González Iñárritu. The film stars Daniel Giménez Cacho as a Mexican journalist and documentarian reflecting on his journey through life. The film will be available for streaming on Netflix on Dec. 16.

PHOTOS: See more of the red carpet arrivals for the 2022 Venice Film Festival.