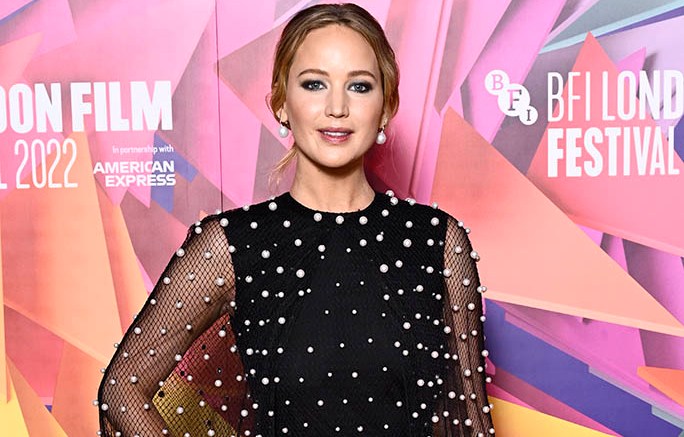 Jennifer Lawrence put her own innovative spin on a jeweled gown at the BFI London Film Festival on Oct. 8. The award-winning actress hit the red carpet for the premiere of her forthcoming film, “Causeaway.”

Lawrence looked stunning for the event, arriving in a layered mesh cape that was adorned with white pearl embroidery allover. She wore the piece over a sleeveless black dress. Her makeup included silver eyeshadow and blotted pink lip. To place more emphasis on her look, the entertainer styled her hair in a low loose curled bun.

When it came down to the shoes, Lawrence completed her look with Gianvito Rossi’s Portofino 105 Suede Sandals. Crafted in Italy from sumptuous black suede, the versatile pair has two slim straps that elegantly frame your ankle and toes, a chic ’60s-style round buckle and are set on a 4-inch heel.

Strappy sandals are taking center stage right now as one of the popular shoe styles. The heels have made many celebrities ditch comfort for their counterpart. With signature interlaced straps varying from barely-there to maximalist-like styles, lace-up sandals are evidently the tried-and-true shoe of the season.

Lawrence is known for being one to watch on the red carpet, however she has become a street style fixture due to her relatable summer wardrobe. Along with her impeccable acting career, the “Hunger Games” star also serves as a Christian Dior ambassador, starring in a series of campaigns for the French fashion house and oftentimes sporting sleek footwear and apparel from the brand both on and off the red carpet. When she isn’t Dior, Lawerence can be found in pieces from Bottega Veneta, Chloe Gosselin Rosie Assoulin and more top names.

PHOTOS: Check out some of Jennifer Lawrence’s most fierce red carpet looks in the gallery.