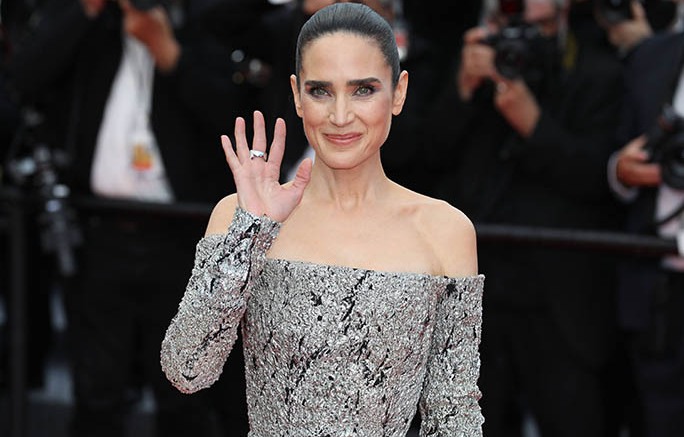 Jennifer Connelly was dressed to impress as she arrived at the “Top Gun: Maverick” premiere during the 75th annual Cannes Film Festival in France today. The long-awaited sequel to the 1986 film officially hits theaters on May 27.

Connelly lead the way at the star-studded with Tom Cruise. The Academy Award winner looked flawless while stepping onto the red carpet in an off-the-shoulder silver metal gown. The dress was complete with a structured neckline, long sleeves and a modest, but billowy train.

Connelly exuded “gilded glamour” by slicking her signature brunette tresses back into a bun and completing her look with a smokey eye and neutral matte lip. To give her dress the moment it deserved, she opted for minimal accessories and only added a large ring that had a black stone.

Unfortunately, her shoe choice was not visible but it wouldn’t be a surprise if she slipped into a pair of classic pumps, stiletto sandals or platforms.

Prior to attending the “Top Gun: Maverick” premiere, Connelly made a stylish statement at a photo call for the film. The “Snowpiercer” alum posed for photos with her costars, Miles Teller and Tom Cruise.

She wore a nude textured dress that was adorned with sequins and intricate beading over a long-sleeve white top. The blouse had a high ruffled collar and two straps that draped from the neckline. The “Labyrinth” star added a pop of color to her look with red knee-high boots. The slip-on silhouette had an almond-shaped toe and a stacked block heel.