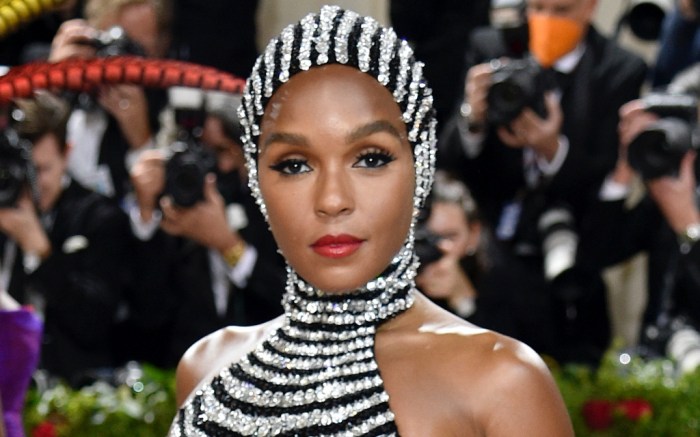 Janelle Monae made a sparkling arrival on the red carpet tonight at the Met Gala in New York City at the Metropolitan Museum of Art.

The Grammy Award-winning musician struck a pose in a sweeping sparkly black gown by Ralph Lauren with a circular train. The backless piece gained added glamour from a built-in headpiece that wrapped around Monae’s head, covered in glittering silver crystals. Completing her ensemble were two large matching cuff bracelets for added glamour – plus a bold red lip and matching sparkly manicure.

The “Pynk” singer’s look, like all of the black and white outfits she’s made her style signature, is an homage to her parents’ uniforms while in the working class — her mother was a janitor and her father was a truck driver — in addition to classic glamour.

For footwear, Monae’s heels were hidden beneath her long skirt. However, it’s likely she wore a metallic, neutral or coordinating pair of sandals, pumps or boots for the occasion. Matching footwear has already become a go-to styling trick at the Met Gala, as seen in looks from the 2022 red carpet worn by Emma Stone, Vanessa Hudgens and Gemma Chan.

Click through the gallery to more Met Gala 2022 arrivals.