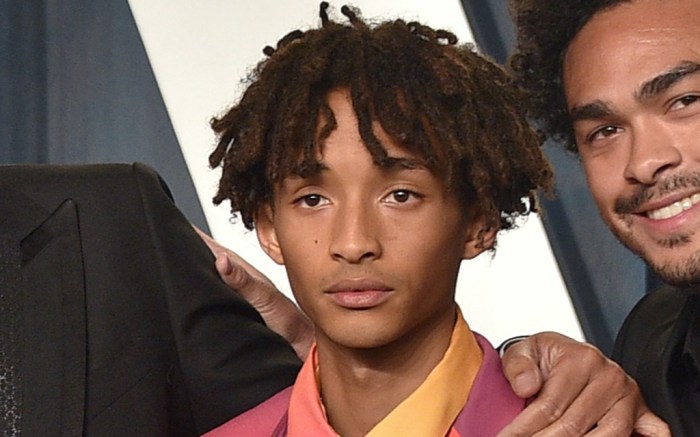 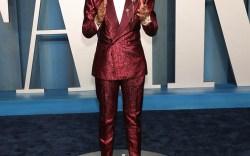 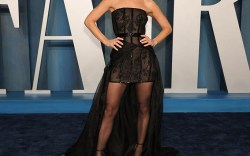 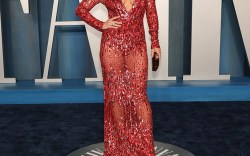 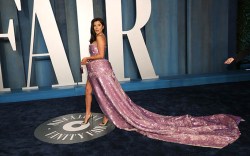 The “Karate Kid” star hit the red carpet at the Wallis Annenberg Center for the Performing Arts, along with parents Will Smith and Jada Pinkett-Smith and siblings Willow and Trey Smith. Within the group, Jaden popped in an ombre suit with a sharp-lapeled blazer and trousers. Paired with a matching tie and shirt, the multi-hyphenate’s look was cast in an ombre gradient of maroon, red, orange and yellow — making a monochrome statement similar to an evening sunset.

For footwear, the MSFTSrep co-founder slipped on a pair of chunky sneakers. Featuring rounded toes with a lace-up silhouette, the off-white style included slightly exaggerated soles for a sporty finish. The pair proved a versatile finish to Smith’s look, while remaining unique and individual against the classic brogues and boots worn to the event.

Earlier in the evening, Smith’s father Will went viral prior to winning his Best Actor award for “King Richard.” During the Best Documentary presentation, Smith slapped presenter Chris Rock for making a joke towards Jada’s alopecia condition. The moment went viral, with Smith apologizing to the Academy for the incident during his acceptance speech. He later apologized to Rock the next day.

“Violence in all of its forms is poisonous and destructive. My behavior at last night’s Academy Awards was unacceptable and inexcusable. Jokes at my expense are part of the job, but a joke about Jada’s medical condition was too much for me to bear and I reacted emotionally,” Smith wrote on Instagram on Monday. “I would like to publicly apologize to you, Chris. I was out of line and I was wrong. I am embarrassed and my actions were not indicative of the man I want to be. There is no place for violence in a world of love and kindness.”

The post continued, “I would also like to apologize to the Academy, the producers of the show, all the attendees and everyone watching around the world. I would like to apologize to the Williams Family and my King Richard Family. I deeply regret that my behavior has stained what has been an otherwise gorgeous journey for all of us. I am a work in progress.”

The Vanity Fair Oscars after-party served as one of the top conclusions of the 2022 Academy Awards, which celebrate the top talents across the film industry. Held at the Wallis Annenberg Center for the Performing Arts, the event always features a star-studded guest list of both Oscar winners, presenters, nominees and those in Hollywood who did not attend. This year’s guest list was packed with star power, including Zendaya, Kim Kardashian, Kate Hudson, Anya Taylor-Joy and more.