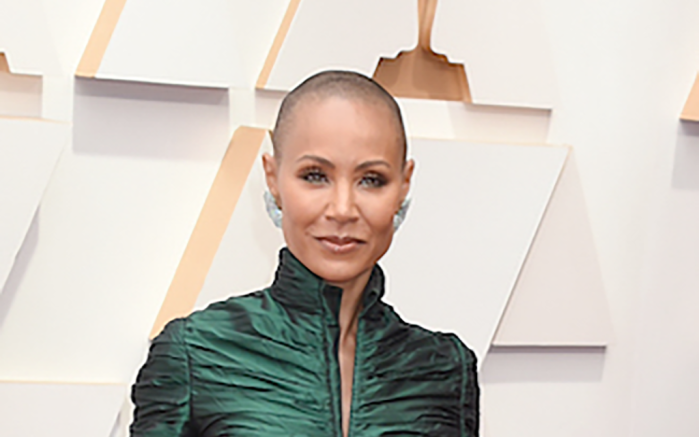 Jada Pinkett Smith goes big and dramatic at the 2022 Oscars. “The Matrix Resolutions” actress walked the red carpet of the 94th Academy Awards tonight in Los Angeles, where she wore a statement-making outfit.

The look consisted of a billowing emerald green gown from Jean Paul Gaultier that had long sleeves and a middle zipper closure. The skirt was flouncy and incorporated a ruched train that added a lot of volume and a burst of texture. The piece also had a high neckline that gave her outfit a sleek, tidy finish.

As for accessories, Pinkett chose to keep it simple with rings that matched her avant-garde fashion moment. She also went with striped nude nail polish that tied her look together seamlessly.

For footwear, she went with a pair of green peep-toe heeled sandals. The shoes had a height of approximately 4 inches and had a sleek ankle strap for maximum security.

Pinkett accompanied her husband Will Smith, who was dressed in a Dolce & Gabbana tuxedo with dress shoes. He’s a Best Actor nominee for his role in “King Richard.”

The 2022 Academy Awards — also known as the Oscars — celebrate the top talents across the film industry. This year’s event, held at the Dolby Theater in Los Angeles, will be hosted by Amy Schumer, Regina Hall and Wanda Sykes. Leading the nominations is Jane Campion’s “The Power of the Dog,” as well as “Dune,” “Belfast,” “King Richard” and “West Side Story.” The event’s nominees include a range of Hollywood’s top stars, including Kristen Stewart, Andrew Garfield, Kirsten Dunst and more. The evening concludes with a range of similarly star-studded afterparties, hosted by the Elton John AIDS Foundation, Vanity Fair and more.