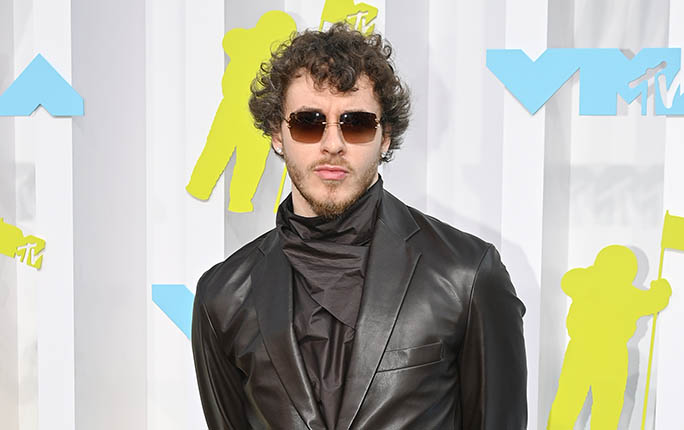 The 2022 MTV Video Music Awards has officially kicked off at the Prudential Center in Newark, NJ. The red carpet is already buzzing with some of music biggest names.

Jack Harlow was one of the many faces to show face at the annual ceremony. The Louisiana rapper is anticipated to have a big night. Harlow is tied with Harry Styles for eight nominations including Artist of the Year.

The “First Class” hitmaker looked dapper for the occasion, arriving in a chocolate leather suit. Harlow’s ensemble consisted of a double-breasted blazer jacket and matching trousers. The chart topping artist complemented the outfit with a satin turtleneck.

Sticking to his signature aesthetic, Harlow accessorized with brown square shades, a silver watch and diamond stud earrings. For footwear, the “Nail Tech” musician completed his look black leather loafers. The silhouette gave his look a smooth finish and included a square toe and chunky outsole.

When it comes to fashion, Harlow is known for having an incomparable sneaker collection. The FN cover star has never been shy about his love for New Balance and timeless streetwear pieces. In February, he was revealed as New Balance’s latest ambassador along with Los Angeles Clippers forward Kawhi Leonard in the brand’s “We Got Now” campaign.