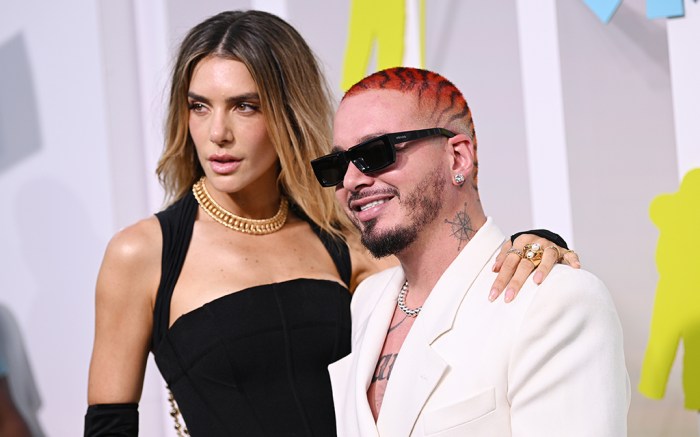 Valentina Ferrer and J Balvin took on the 2022 MTV VMAs red carpet tonight in New Jersey as a couple, the pair showing out in complementary black and white outfits. Ferrer wore a dramatic lengthy halter-style gown fitted with a layered gold chain belt that brought the drop-waist of the garment inwards, shaping the piece further. The dress featured disconnected sleeves and a shiny skirt that jutted out from the long corset-style midsection, creating impressive volume.

Mirroring the chain detailing in her accessories, the former Miss Argentina 2014 donned statement gold rings, a bracelet, and a large necklace that brought the ensemble a welcomed sparkle. Despite the head-turning outfit, Ferrer kept things simple for her hair and makeup, emphasizing her features with a natural glow while her ombré locks were parted down the middle and worn straight down her back.

The model stood a head taller than Balvin, standing at 5-foot-9 and the Colombian singer at 5-foot-7, her heels, although not visible under her gown, no doubt making her taller.