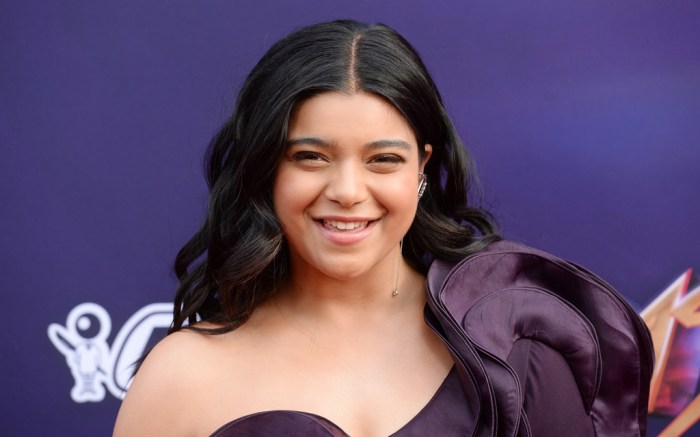 Iman Vellani looked elegantly on the carpet for the launch event for Disney+ series “Ms. Marvel,” hosted at El Capitan Theatre in Los Angeles. For the red carpet of the premiere, the titular star wore a purple ruffled one-shoulder gown with an unexpected choice in shoes.

The dress was a conversation starter with its swirling ruffles that spanned the side of the chest into the shoulder, and then finally wrapped under the sleeve. The dress honed in so many details, beginning from the traveling petals that are so spectacularly voluminous along with the layered slit rising on the side of her leg.

The shape of the ruffle on the upper part of her sleeve was stunning within itself, as it sits right on her shoulder, framing her.

Vellani accessorized heavily, wearing many rings that sparkled against the dark purple of her dress. With a silver bracelet and earring cuffs, it met the aesthetic of the setting as it wasn’t overly formal but wasn’t casual either.

For her shoes, she settled on a platform sneaker by Stella McCartney that brought a playfulness to the carpet. Starting out as a metallic oxford, the “Elyse” sneaker warped into a 3-inch wooden platform stacked on a white sawtooth sole. The shoe was immensely creative as it held many different layers to create a standout shoe, which Vellani noticed as she made sure to highlight her footwear as well.

The contrast of her sneakers to her dress enwrapped the theme of formality with casual-wear. As well as the fact that the footwear worked well with Vellani’s choice of jewelry, which ultimately created a look of cohesion.