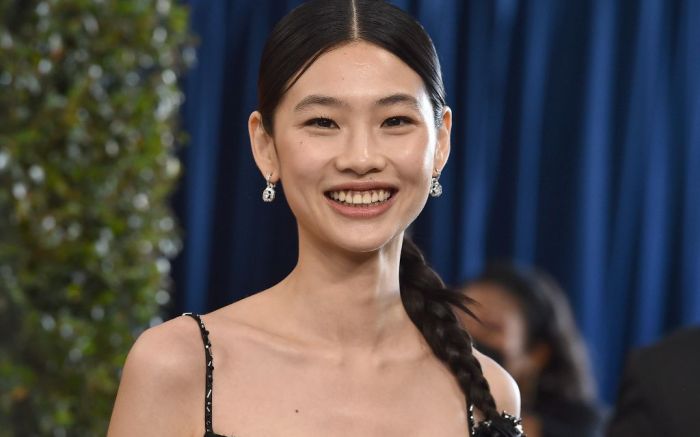 Awards season is officially in full swing and celebrities are pulling out all the stops for their looks. HoYeon Jung put on quite a fashion-forward display for her first Screen Actors Guild Awards on Sunday in Santa Monica, Calif. The “Squid Games” actress arrived in a black custom gown by Louis Vuitton.

The spaghetti strap dress was embroidered with crystal and silver beads and complete with a high center split. Jung opted for minimal makeup and accessorized with dainty diamond earrings and a ring, which was also by the French label.

She pulled her hair back into a long braided ponytail and added a bedazzled scarf to the ends to match her dress. When it came down to footwear, the model finished off her look with a pair of black strappy sandals.

Click through the gallery to see all of the red carpet celebrity arrivals at the 2022 SAG awards.

The 28th annual Screen Actors Guild Awards takes place on The Barker Hangar in Santa Monica on Sunday, Feb. 27 at 8 p.m. ET and is airing live on TNT and TBS. For the first time in the show’s history, it will also be put onto HBO Max the following day for anyone who missed the action or simply wants to relive it. Top nominees at the 2022 SAG Awards include “House of Gucci” and “The Power of the Dog.” On the TV side, “Succession” and “Ted Lasso” lead nominations.