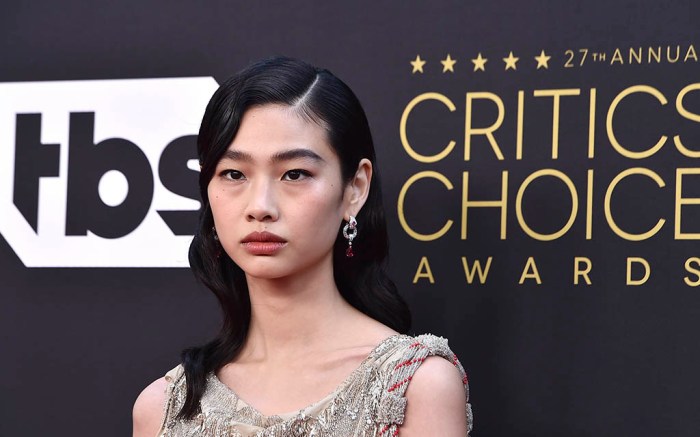 The 27th annual ceremony honors the top performances in film and television, and will be broadcast live from Los Angeles. The red carpet is already seeing a range of standout looks, most featuring single-toned or metallic gowns. Stiletto sandals and pointed-toe pumps are reigning supreme for most stars, including Fanning, Margaret Qualley and Demi Singleton.

Kristin Chenoweth went sleek on the red carpet, stepping out in a black column gown. Her look gained added glamour from the dress’ sequined cutout halter-neck bodice, as well as sparkling bracelets.

The Critics Choice Awards honor the year’s top pictures and performances of film and television. This year’s event, hosted by Taye Diggs and Nicole Byer, will be broadcast from Los Angeles. Leading the film categories are “West Side Story” and “Belfast,” while the TV side is led by “Succession.” The Critics Choice acting categories are led by stars from most nominated projects, including Lady Gaga, Kristen Stewart, Will Smith, Ariana DeBose, Kirsten Dunst and Andrew Garfield.