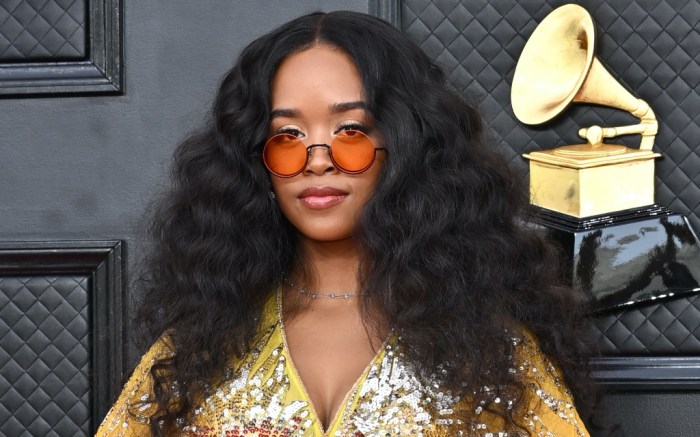 H.E.R. brought statement dressing to a bold new level in Las Vegas at the 2022 Grammy Awards on Sunday.

Embodying ’70s glamour, the award-winning musician hit the red carpet in a flowing jumpsuit by Dundas. The yellow number featured a high-waisted silhouette with an asymmetric gold sequin design swirling across its bodice and right leg. Her outfit, which was inspired by Aretha Franklin’s 1976 American Music Awards dress, gained added drama from wide sleeves in a vibrant citrus yellow hue. Completing H.E.R.’s look were metallic rings, delicate silver necklaces and round orange sunglasses.

When it came to footwear, the “Slide” singer’s shoes weren’t fully visible beneath her jumpsuit’s long pants, only revealing a sparkly gold platform. However, the singer’s footwear hailed from Casadei, featuring a custom version of the brand’s unisex Rock Limelight sandals. The style included gold glitter uppers across thick platform soles and 6.2-inch heels, secured with crossed front and slingback straps. The pair gave her ensemble a boost of bold glamour — a signature of Franklin’s if ever there was one.