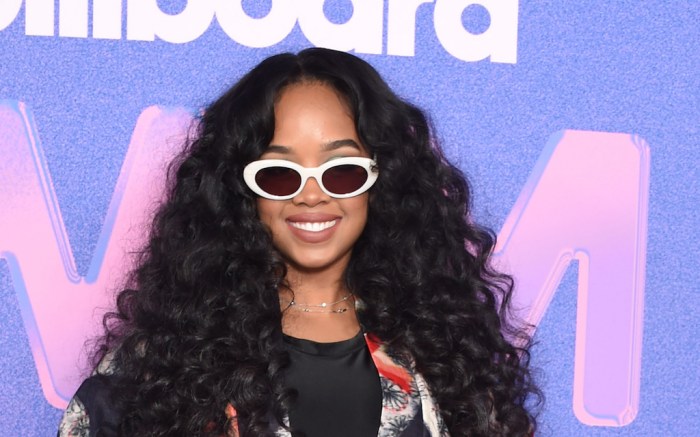 H.E.R. blossoms in refined splendor for the Billboard Women in Music Awards. The “Damage” singer attended the red carpet for the event, where she wore a look that aligned with her distinct tastes. Performers for the empowering night of music included Doja Cat, Olivia Rodrigo and Phoebe Bridgers.

When it comes to H.E.R.’s look, she wore a mostly black ensemble that consisted of a floral printed robe that had a black, red, pink and white color scheme. Underneath, she opted for a slick black jumpsuit that emphasizes being stretchy and comfortable, along with a crew neckline. The piece came to the floor and created a billowing, flowy appearance.

H.E.R. chose to add a sophisticated touch with her accessories, wearing a dainty necklace, a shiny platinum watch, a silver watch and a diamond ring. On her face, H.E.R. wore a pair of white oval-shaped sunglasses.

Although H.E.R.’s shoes got covered up by the hemline of her jumpsuit, it’s safe to say that she was wearing a pair of pumps or sandals that coordinated with her outfit.

When the time comes for H.E.R. to saunter on to a red carpet, she wears designs from labels like Valentino, Alexandre Vauthier and Christian Dior.