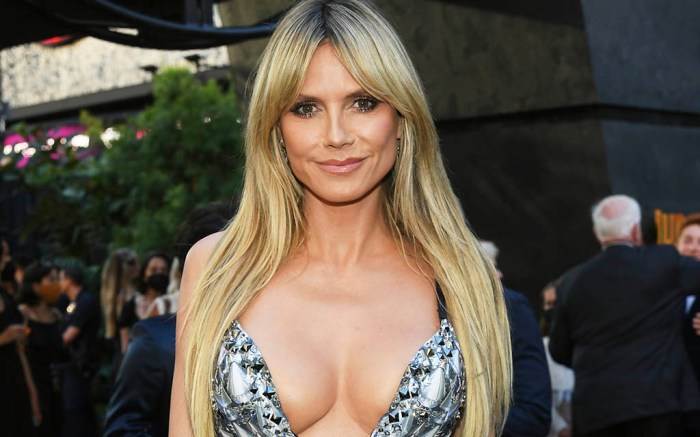 Heidi Klum is a red carpet stunner, always pulling out daring and experimental looks for high-profile events. When attending the premiere of “Jurassic World: Dominion” on Monday, the iconic supermodel hit all her usual style marks, choosing to watch the film in an edgy plunging dress.

For the Los Angeles event, the 49-year-old supermodel wore a fitted uber-printed dress by designing duo The Blonds. The garment featured a gloriously busy geometric fabric inspired by metal studs, crystals, and spikes. The design is actually available for purchase, retailing for a cool $4,500 on The Blonds website. The sleeveless dress’ hem hit Klum right at the ankles, showing off her choice of black patent leather stiletto sandals.

Klum wore her blond locks straight with a middle part, focusing her makeup look around a slightly smoky shimmering eye look. The star let her eye-catching dress do all the talking, accessorizing only with a black clutch.

Klum attended the premiere with her 18-year-old daughter Leni Klum, who wore an equally-edgy black ensemble with lace-up pants and a corseted top. Style runs in the family: Leni is taking after her mother, making her mark as a rising model.

“Jurassic World: Dominion” completed its global tour with a premiere in Hollywood at the Grauman’s Chinese Theatre. In addition to Klum and her daughter, the star-studded attendees included Lindsey Vonn, Christina Milian, Karrueche Tran, Terry Crews and Pete Wentz. The film, which stars Chris Pratt, Bryce Dallas Howard, Sam Neill, Lara Dern and Jeff Goldblum, is the franchise’s sixth and final movie and debuts in theaters on June 10.