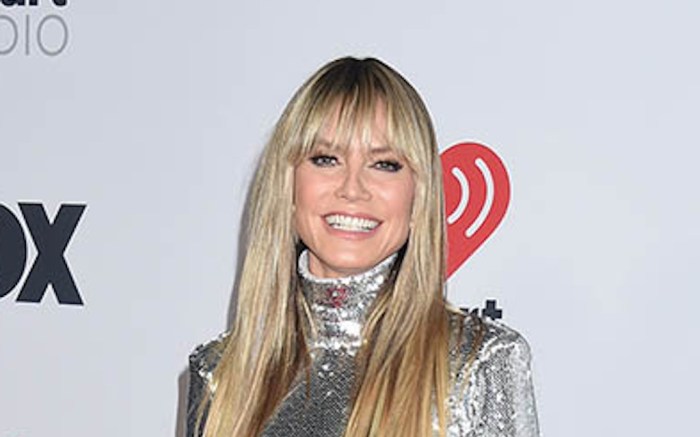 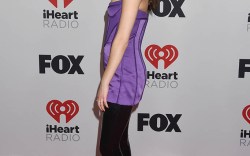 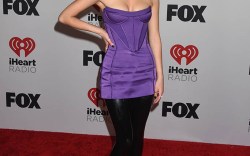 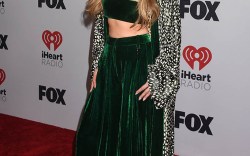 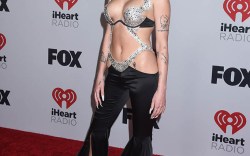 Heidi Klum glimmered and sparkled at the 2022 iHeartRadio Music Awards last night in Los Angeles at the Shrine Auditorium. Klum attended the event with her husband, Tom Kaulitz, on her arm.

The supermodel wore a silver metallic minidress adorned in paillettes around the skirt. The garment had long sleeves and featured a smooth sequined bodice and turtleneck design.

Klum kept it simple and accessorized with stud earrings and a silver rectangular clutch, decked out in matching hardware, that coordinated with her shiny ensemble.

A pair of metallic gold wedges provided a monochromatic finish to her outfit. The shoes had a sleek ankle strap for security, and they also had a pointed-toe silhouette. The wedges had a height of approximately 4 inches and incorporated slick leather uppers.

The 2022 iHeartRadio Music Awards, which honors the most-played stars on iHeartRadio’s stations and app, were held at the Shrine Auditorium in Los Angeles. This year’s event, hosted by LL Cool J, awarded the annual Icon Award to Jennifer Lopez, who also performed her songs “Get Right” and “On My Way.” Additional performances included Megan Thee Stallion, John Legend, Charlie Puth, Jason Aldean, Billy Porter and Maneskin. The event’s top awards were given to Olivia Rodrigo, Dua Lipa and Lil Nas X, among others. Attendees included stars across music, movies and TV, including Avril Lavigne, Willow Smith, Nicole Scherzinger, Taylor Momsen and Kelly Rowland.

The “Germany’s Next Topmodel” host and judge made a name for herself within the fashion industry over the years. She’s starred in campaigns for Liz Claiborne and Marc Jacobs. She also hosted Victoria’s Secret’s famous runway show for many years during the early aughts.

Click through the gallery to see more arrivals on the iHeartRadio Music Awards 2022 red carpet.