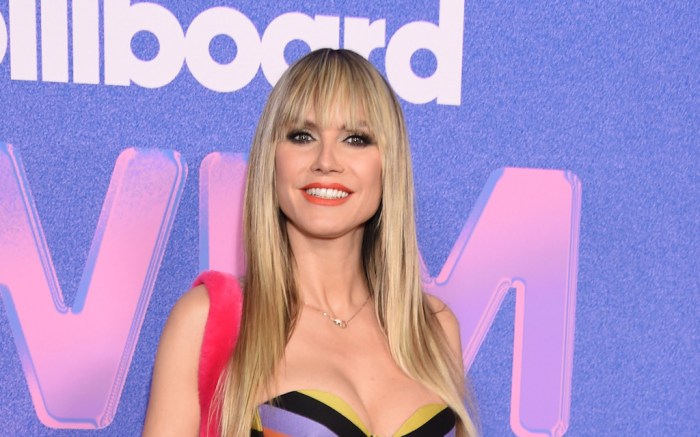 Heidi Klum makes a colorful splash on the red carpet. The “Germany’s Next Topmodel” host and judge was spotted on the carpet for the Billboard Women in Music Awards on Wednesday night in Inglewood, Calif., with her husband, Tom Kaulitz, on her arm.

Klum decided to pop on a multicolored striped Moschino gown that was strapless and featured a plunging neckline. The garment had a slight peplum at the waistline that added volume to the already powerful look. The bodice’s construction created an eye-catching pattern with the stripes that contrasted against the rest of the dress.

For accessories, Klum kept her jewelry simple with a dainty necklace. On her fingers, she wore a bright orange nail polish that matched the high-energy vibe of her attire. And finally, she carried a pink shoulder bag that incorporated a pair of pink eyes that had long black eyelashes for a kitschy twist.

To complete everything, Klum popped on a pair of black patent leather pumps that had a pointed-toe design along with a slim ankle strap for extra security. The shoes had a slick appearance and a heel height of three inches.