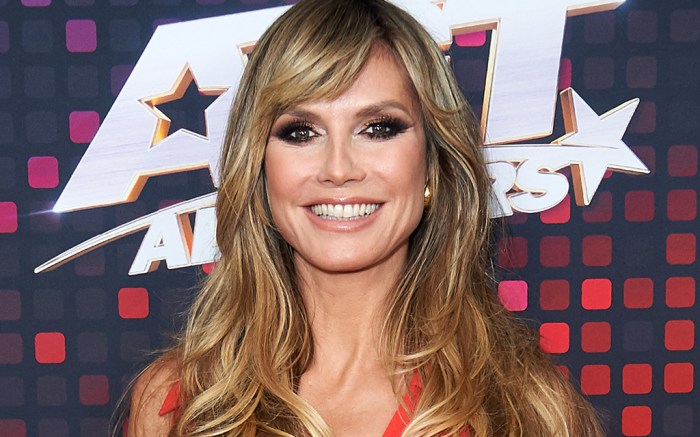 After winding down her smash hit Halloween party, Heidi Klum got herself ready for the “America’s Got Talent: All-Stars” taping at Radford Studio Center in Studio City, Calif.

Klum graced the event yesterday in a statement-making red jumpsuit and glimmering footwear. The star zipped into a ’70s-style jumpsuit with a sleeveless top, a plunging neckline, and followed by fitted flared pants. The jumpsuit was then belted in the middle to alter Klum’s silhouette.

The German-American businesswoman wore her long blond hair down styled in waves and a swooping side part and simply accessorized with gold studs.

On her feet, Klum stepped into gold sandals with stiletto-style heels and a platform base that effectively elevated the model’s outfit, while offering her some extra inches.

Often defined by long straps that wrap around the ankle and up the leg for security, strappy sandals are a popular choice with shorter dresses and other silhouettes that showcase legs.

Klum’s shoe lineup, on and off duty, has included sleek boots and strappy sandals from brands like Valentino, Dries Van Noten, and R13. When the occasion calls for it, Klum has been seen in pumps and mules from Gianvito Rossi, The Attico, and Femme LA. Klum’s career extends far beyond wearing fashionable shoes. The German-American began her career modeling for Victoria’s Secret and Sports Illustrated.