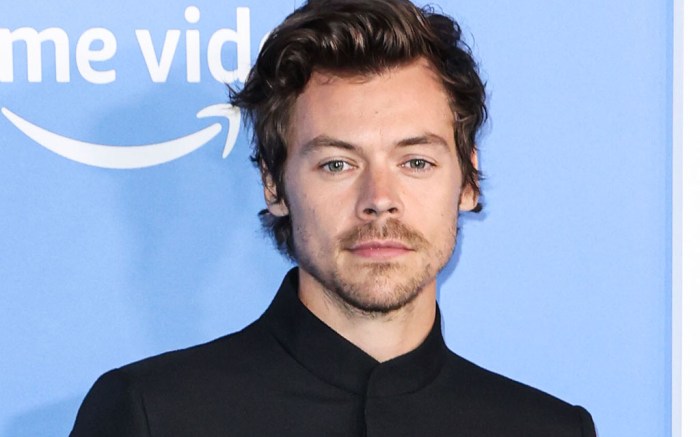 Harry Styles brought militaristic style to the premiere of Amazon Prime’s “My Policeman,” his new film. The event was held at the Regency Bruin Theatre in Los Angeles yesterday. Styles attended alongside his co-star and on-screen lovers David Dawson and Emma Corrin.

The “Music for a Sushi Restaurant” singer was dressed sharply in all-black down to his shoes – an unexpected choice for Styles, who has made vibrant colors, retro patterns, and campy outfits his signature style over the last few years.

Styles’ look began with a high-collar black top that was belted in the middle to cinch the silhouette. On bottom, the Gucci global ambassador wore straight-leg pleated trousers, also in black, that further complemented the look.

On his feet, Styles stepped into a classic pair of black boots with a playful twist, the leather footwear fitted with square prominent toes and a slight heel that had the “Don’t Worry Darling” actor reaching new heights. The formal footwear included a sturdy composition and a versatile silhouette.

When it comes to fashion, Styles has become renowned for his glamorous, retro and fluid outfits. The “Dunkirk” actor frequently wears Gucci, as he’s one of the luxury label’s campaign stars, but also wears bold knits, jackets and sets from Marc Jacobs, J.W. Anderson, Lanvin and Bode. His onstage costume often includes sparkly pieces from independent designers like Archie Alled-Martínez and Harris Reed.

For footwear, Styles is a fan of Gucci loafers and boots. London brand Roker has also outfitted him. When off-duty, Styles typically wears athletic or comfy slip-on sneakers by Nike, Adidas, Vans, and New Balance.

“My Policeman” follows Tom, played by Harry Styles, a policeman in 1950s Britain, as he falls in love with a schoolteacher on the Brighton coast. However, he soon begins a passionate same-sex affair with a museum curator, in spite of homosexuality being illegal back then.