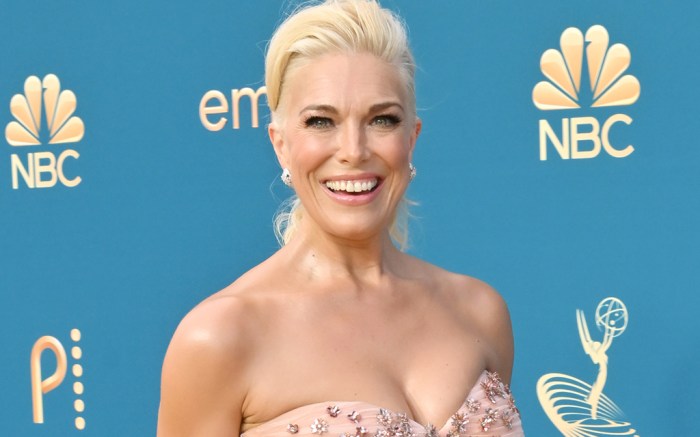 Hannah Waddingham took to the golden carpet at the 74th Annual Primetime Emmy Awards in Los Angeles tonight in a blush pink gown and hidden sneakers. The “Ted Lasso” star is nominated for Outstanding Supporting Actress In A Comedy Series for the second year in a row.

Practically engulfed in tulle, Waddingham’s dress was a strapless style with a sweetheart neckline and a corset-like bodice striped and bedazzled in rose gold crystals. The see-through tulle overlay trailed behind the actress while acting as a voluminous addition to the garment.

While Waddingham’s shoes were eclipsed by the cascading hem of her gown, the British revealed during an interview with Laverne Cox to be wearing custom Dolce & Gabbana sneakers under her skirt. “Nobody knows that I don’t get heels on underneath,” she told.

Accessorizing minimally, the actress wore a silver diamond ring and dazzling diamond earrings to match. She wore her bleach blond locks in a quaffed up-do and accentuated her features with glittering gold accents.

Before the big night, Waddingham recently appeared on “Jimmy Kimmel Live!” with RuPaul serving as a guest host in Jimmy Kimmel’s stead. The 48-year-old discussed everything from her role in the “Hocus Pocus” sequel to her exciting Emmys nomination, all while wearing a fitted bright blue midi dress. The actress paired the risky dress with a classic pair of black patent leather pumps fitted with a  pointed toe.

PHOTOS: See what other celebrities wore to the 2022 Emmy Awards red carpet.