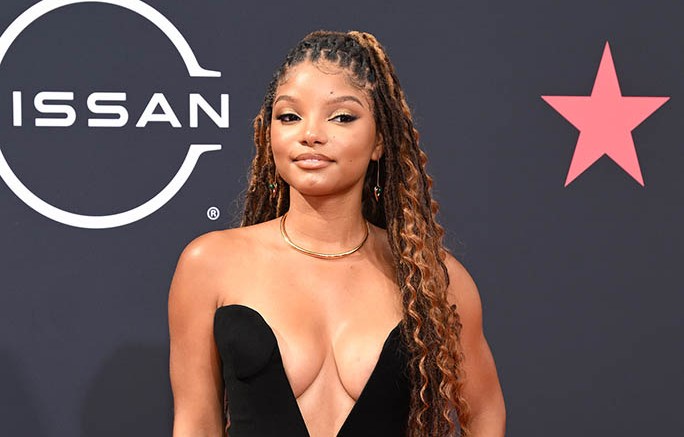 Halle Bailey took a break from filming “The Little Mermaid” to attend the 2022 BET Awards held at the Microsoft Theater in Los Angeles on Sunday. The singer popped out to support her sister Chloe Bailey, who is slated to hit the stage at culture’s biggest night.

Halle graced the red carpet in a black gown from Monot’s Pre-Fall 2022 collection. The top of half of the ensemble featured a plunging corset top that had a deep V-neckline and slightly pointed hem. The skirt fell delicately on her hips and created side cutouts. The garment also included a slit at the back.

The “Grownish” actress styled her caramel locs half up, half down and opted for bronzy makeup with a neutral lip. Halle kept her accessories minimal, only adding a gold choker necklace and a few bracelets.

Completing her look was a pair of black mules. The shoe style featured an open-toe and sat atop a tiny heel. Mules recently saw a bump in popularity in the 2010s in all types of fashion. The silhouette can feature a variety of heel heights, with closed-toe mules often featuring flat soles while open-toe varieties often feature high heels.

Scroll through the gallery to see more celebrity red carpet arrivals at the 2022 BET Awards.