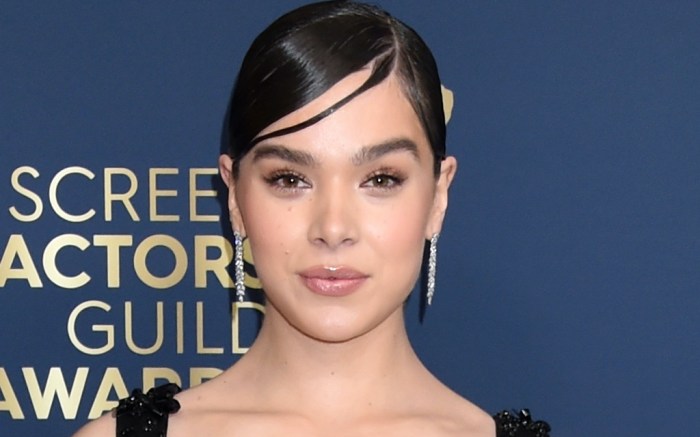 Hailee Steinfeld showed off her slick side at the 2022 Screen Actors Guild Awards. The actress was one of the evening’s presenters on Sunday night.

The “Dickinson” star hit the red carpet in a gleaming black dress by Miu Miu. The daring custom number featured a streamlined floor-length column skirt with a back slit, as well as wide shoulder straps. However, it gained a risqué element from its front, which featured a plunging neckline and bodice cutout resembling a push-up bra. Glamour came in the form of intricately placed black beads, which resembled a dusting of flower petals. 2021 FNAA Style Influencer of the Year Law Roach, who styles Steinfeld, completed her look with delicate Tiffany & Co. diamond rings and thin, leaf-shaped drop earrings.

When it came to shoes, the “Hawkeye” actress’ footwear was hardly visible from her skirt’s length, though she was wearing platform heels by Jimmy Choo. The black pair appeared to feature toe straps and thick platform soles, giving her look a height boost and streamlined edge. The style likely included ankle straps and block or stiletto heels, similar to trending pairs on the SAG Awards red carpet.