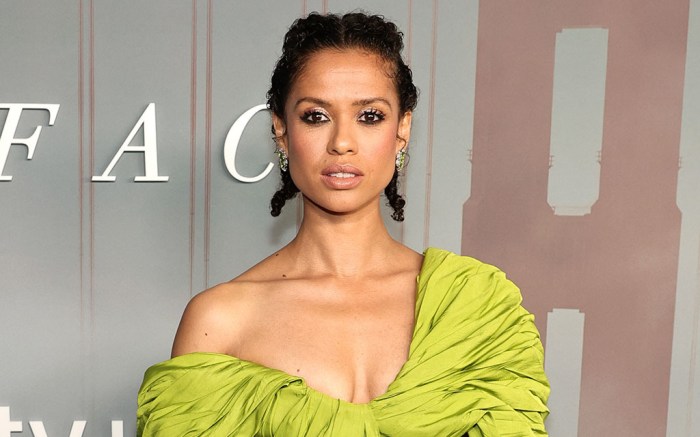 For the Apple TV+ series “Surface” in New York on Sunday at The Morgan Library, Gugu Mbatha-Raw arrived on the red carpet channeling a Renaissance painting.

The leading star of the thriller came dressed in such a vivacious Alexander McQueen gown complete with striking details, including its rich color of this green. The bust of the dress curved around the center, with a bone framing as her right sleeve hung off her shoulder, wrapping around her arm and continuing behind her back.

The other sleeve was neatly perched on her shoulder, which gave a languid and effortless amount of grace to the gown. The side of the dress had a bow feature that wasn’t overly prominent, but visible enough as it created its own pleated shape on the gown.

The great thing about this dress was how it didn’t sweep the floor as the pleated draping around her ankles only overlapped her heels.

For her accessories, the “Belle” actress wore a pair of adorning green earrings with an irregular shape to match the ruby bangle on her left wrist. The additions of green, especially in a darker shade, helped to hone in the rich bright green palette that was produced by the dress.

For her hair, she did an interesting style that featured two braids to the back, as they framed around her jawline. The choice of these braids added even more of a Renaissance nod. To cool down the bright colors, she finished her makeup off with a shimmery eyeshadow and a smoky eyeliner along with a nude lip.

There’s nothing like an invisible heel. Mbatha-Raw’s choice was favorable as the silver metal across the toe and ankle added futuristic interpretation to the wisely historical look. It blended two contrasting aesthetics and the pointy heels were the best choice as they held their own and didn’t overpower the garment. The invisible touch allows much versatility.

To end the night, the actress took a picture with Reese Witherspoon, who shined on the carpet with an off-white midi dress and shimmering accents, as she paired her dress with another pair of pointy heels.

Give your next look a slick edge with see-through heels.