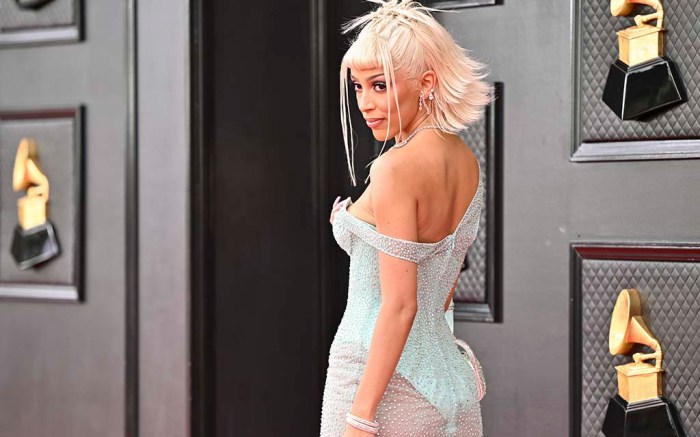 The 2022 Grammy Awards red carpet has officially kicked off in Las Vegas on Sunday. And the stars are making a statement with their fashion.

Singer Doja Cat, for instance, wore a sheer, bustier Versace dress covered in crystals. The light blue ensemble featured an off the shoulder look, which she paired with the brand’s matching blue Triplatform platform sandals. Doja wowed in 2000s-inspired hair style and a diamond necklace.

Actress Laverne Cox made an appearance at the 2022 Grammy Awards. She is hosting E!’s red carpet coverage. For her outfit, the “Orange Is the New Black” alum wore a mesh John Galliano dress with ankle-strap pumps. She completed her look with a purple hairstyle and fascinator.

Also hitting the red carpet was comedian Chelsea Handler, wearing a black off-the-shoulder lace dress. The midi-length of the look let her metallic pumps shine. This marks Handler’s first Grammy nod for her “Evolution” stand-up special, which is nominated in the Best Comedy Album category tonight.

The 2022 Grammy Awards air tonight at 8 p.m. ET on CBS, honoring excellence and outstanding achievement in the music industry for the year. Hosted by “The Daily Show’s” Trevor Noah, the show takes place in Las Vegas at the MGM Grand Garden Arena. Up for top awards this year are singer-songwriter Jon Batiste, who leads the Grammy nominations with 11 nods; Doja Cat, H.E.R. and Justin Bieber, who are not far behind with eight nominations each. Performers include J Balvin, John Legend, Carrie Underwood and more.

To see all the red carpet arrivals at the 2022 Grammy Awards, click through the gallery.