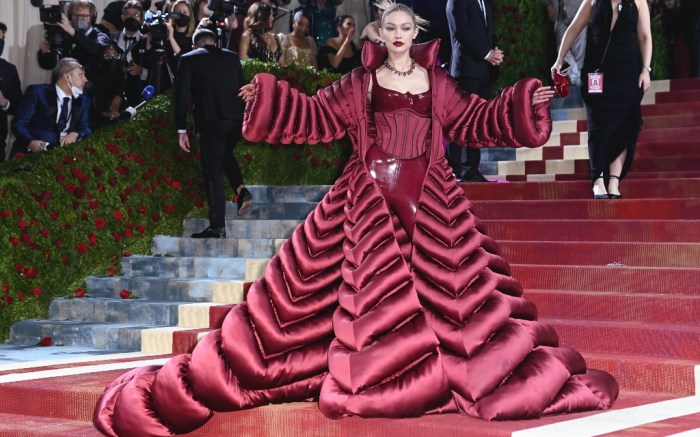 Gigi Hadid went the slick route when hitting the red carpet at the 2022 Met Gala.

The supermodel arrived on Monday to the “In America”-themed occasion at the Metropolitan Museum of Art in a custom Versace outfit. Forming its base was a deep red latex catsuit, featuring long legs and a sleeveless top. Complete with a boned cinched corset bodice and square neckline, her outfit paid tribute to Regency-era romanticism in the 1800s while remaining utterly modern. A golden chain-link necklace and rings added a touch of edgy glamour, as well — fitting into the “Gilded Glamour” white-tie dress code.

Hadid’s ensemble — which included a silky maroon puffed coat with flared sleeves — leaned into the same themes of Versace’s Fall 2022 runway show, which she walked in alongside sister Bella Hadid. Though Hadid’s ensemble for the Met Gala was a custom design, the piece’s color, texture and corsetry appeared to combine the elements and aesthetics of both her and Bella’s previous Versace looks.

For footwear, Hadid opted to streamlined her outfit with a femme fatale twist: a pair of matching boots. Also crafted from glossy dark red latex, the pair featured triangular pointed toes and slim-fitting uppers in a calf-high silhouette. The style also featured thin stiletto heels that totaled at least 4 inches in height for a sharp finish. The pair coordinated so specifically with Hadid’s outfit, in fact, that they appeared melded with her catsuit to create a fully streamlined effect.