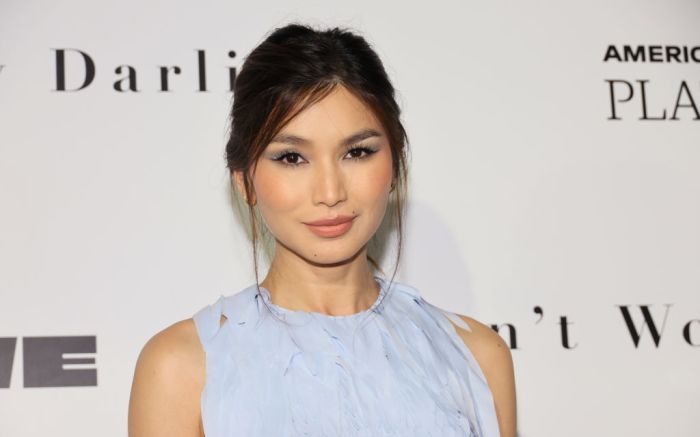 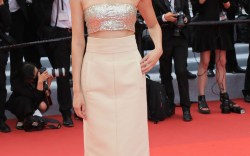 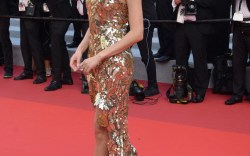 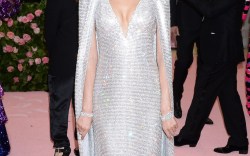 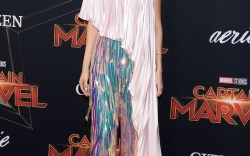 Gemma Chan continued her press tour to promote the release of her most recent film, “Don’t Worry Darling,” in New York City.

Chan wore a custom Louis Vuitton gown for press photos that was baby blue and ruffled from top to bottom in layered feathers. The gown had a black bow tied in what appears to be a thick ribbon wrapped around her waistline to separate the custom gown into compartments. The gown showed off her shoulders bare with a jewel cut.

As far as shoes, Chan opted to wear open-toe stilettos, her toes painted black to match the black ribbon tied around her waist.

To compliment her custom gown, Chan wore a baby blue shade of eyeshadow and a neutral pink lip. Her entire outfit was pulled and styled by celebrity favorite, Rebecca Corbin-Murray. Chan has worked with Murray many times over the last year to put together and serve her red carpet looks.

Murray has been known to also work with stars Lily James, Florence Pugh, and Karen Gillan amongst others in the industry. Chan’s hair was pulled back in a loose and effortless bun with her bangs framing her face to the side. The actress kept her accessories at a minimum and wore stud earrings and a black ring.

Other castmates to appear at the promotion for the film were Harry Styles, Sydney Chandler, Douglas Smith, Nick Kroll, and Kate Berlant. The starlet and star runner of the film, Florence Pugh was noticeably absent from the photocall event as was Chris Pine.