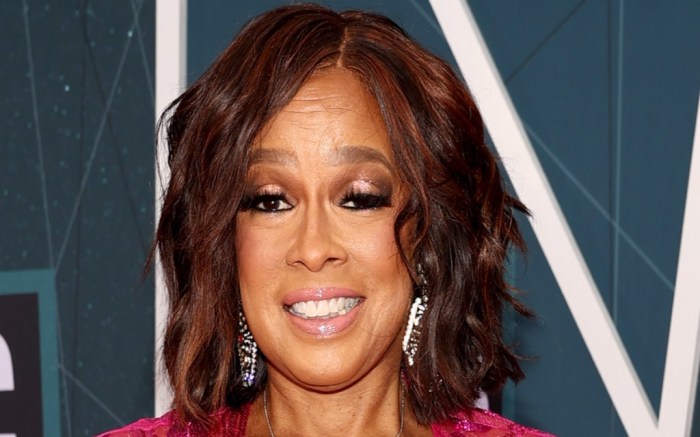 The “CBS This Morning” host arrived on the red carpet, smiling and posing with ceremony host Anthony Mackie and comedian Joel McHale. For the occasion, she sparkled in a hot pink custom Marc Bouwer jumpsuit with allover sequins, featuring a strapless silhouette. Layered overtop was a sheer dark pink robe with circular embroidery. Completing King’s look was a delicate pendant necklace, large statement earrings and rainbow-hued clutch covered in crystals.

For footwear, the O, The Oprah Magazine editor-at-large’s high heels were hidden beneath her jumpsuit’s legs. However, peeking beneath their hems were thin metallic soles in a similar pink hue. It’s likely King’s footwear consisted of a coordinating pink sandal or mule with stiletto or block heels.

The CMT Awards celebrate the top music videos and television performances by country musicians. The 2022 ceremony, broadcast from Nashville, will be hosted by Kane Brown, Anthony Mackie and Kelsea Ballerini. This year’s event also includes numerous star-studded performances from Carrie Underwood, Miranda Lambert, Keith Urban and more. Nominations are led by Brown with four — including video of the year — as well as Ballerini, Mickey Guyton and Cody Johnson with three each. The show will be airing live from CBS and streaming in Paramount+ at 8:00 p.m. EST.