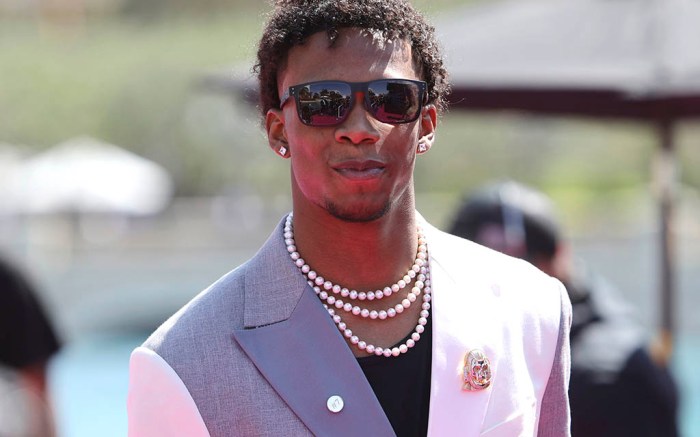 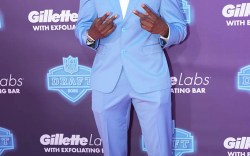 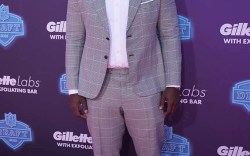 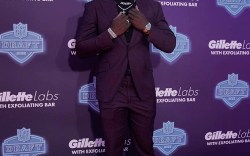 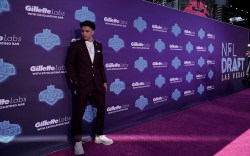 Garrett Wilson showed up to the red carpet of the 2022 NFL football draft in Las Vegas today in the most amazing outfit, including Prada combat boots that rendered him fully prepared to stomp out the competition.

The 21-year-old Ohio State wide receiver was selected by the Jets, and he showed up dressed for the best. He wore a two-toned gray and white blazer that featured corresponding pants. The best part though? Obviously, the shoes.

To top off such a bold outfit, Wilson definitely needed a shoe that could hold its own, and that’s exactly what he found in Prada lug-sole leather combat boots. They feature leather uppers, laces and attached zip-up pouches that held on to the shoe with a buckle. They have chunky leather soles and feature nylon lining. Of course, it’s hard to overlook the prominent upside down silver triangle that is the defining Prada logo.

The boots were the perfect bold option to pair with his gray and white suit. The two-toned blazer features a gray and a white side, with opposing colors on each sleeve. While the pants and blazer colors perfectly correspond, the colors are switched for the arms and legs so that it looks extra eye-catching. Underneath the blazer, he wore a black tank top.

To solidify himself as a fashion icon, Wilson wore three stand-out strands of chunky pearls. No matter what team he ends up playing for at the end of the night, with this outfit he’s already a winner.

See more sports stars on the red carpet at the NFL Draft 2022.