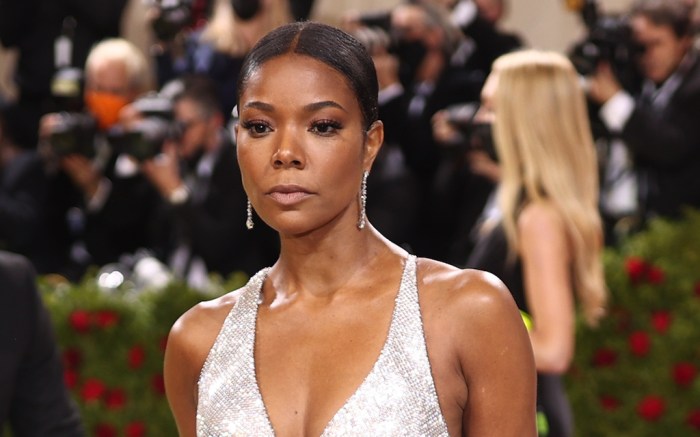 Gabrielle Union twinkles and shines in silver on fashion’s biggest night of the year. The “Deliver Us from Eva” star attended the 2022 Met Gala last night in New York City alongside her husband Dwyane Wade while posing on the famed steps of the Metropolitan Museum of Art.

Union went bold in a plunging silver Atelier Versace gown that featured a bold red floral appliqué on the front of the garment for a bright burst of color. The sleeveless dress also had a billowing floor-length hemline and incorporated a white train that wrapped around her waist and added a whimsical element with white floral appliqués adorning the dramatic piece of fabric that trailed behind her.

The New York & Co. collaborator went sparkly in a bracelet, matching rings and dangling diamond-encrusted earrings that tied her look together seamlessly.

Although her hemline covered up her shoes, Union opted for a pair of Jimmy Choo’s “Dahl” platforms.

Wade, on the other hand, went with a white suit, sans top, that gave his attire an edgy finish. The outfit also had shiny gold buttons, and he accessorized it with a diamond-encrusted necklace.

Click through the gallery to see the best dressed at the 2022 Met Gala.