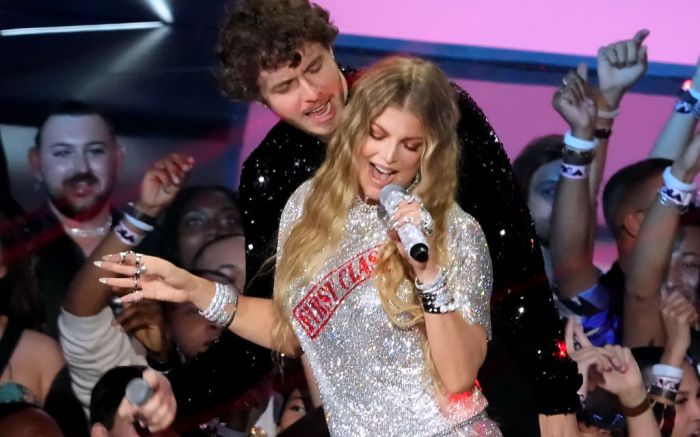 Fergie returned to the MTV Video Music Awards in an outfit that was, in a word, glamorous. The singer teamed up for a dual performance with Jack Harlow, singing her song “Glamorous” after the rapper performed “First Class” — which sampled the 2008 pop hit’s catchy “G-l-a-m-o-r-o-u-s” statement.

While taking the stage at Prudential Center in Newark, New Jersey on Sunday night, the “Fergalicious” singer arrived in a sequined silver T-shirt and miniskirt. Her set was given a whimsical twist from red sequins spelling “First Class” in stamped lettering, complete with a black tulle boa. Adding to the drama of Fergie’s ensemble were stacked crystal bangles, rings, necklaces and chokers — as well as a soaring set of block-heeled platform sandals covered in matching sparkling crystals.

Meanwhile, Harlow also slipped into a glamorous ensemble of his own. The rapper kicked off the duo’s performance by singing his hit “First Class” in maroon trousers, a white shirt and a gray vest as a flight attendant on an airplane-like set — whose passengers included Avril Lavigne, Lil Nas X, Chloe Bailey and Saucy Santana. After stripping down to a black sequined long-sleeved top and black trousers, Harlow turned the audience’s attention to Fergie’s surprise entrance.

The pair’s starry performance came after they coordinated while arriving to the Awards. Fergie sparkled in crystal-covered pumps with platform soles and soaring heels, paired with a magenta leather one-shouldered dress trimmed in orange feathers. Harlow, meanwhile, struck a pose in a two-toned glossy green leather jacket and pants, complete with white leather sneakers with light peach rubber soles.