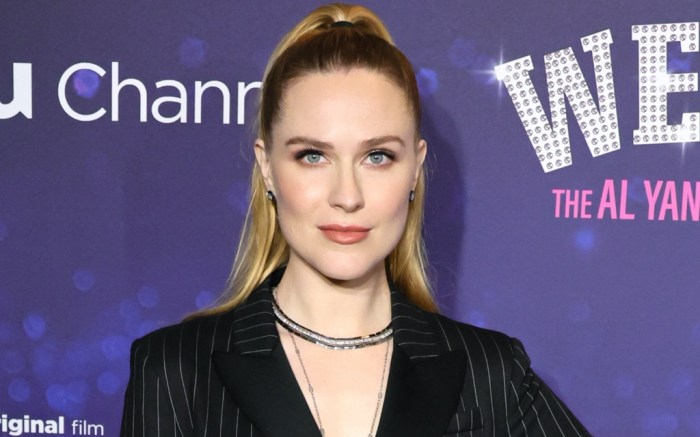 Evan Rachel Wood brought sharp glamour to the red carpet for the US premiere of “Weird: The Al Yankovic Story” in New York City this weekend. Based on a 2010 short Yankovic made for Funny or Die, this fictionalized biopic also stars Daniel Radcliffe, Julianne Nicholson and Toby Huss, streaming on Roku on Nov. 4.

For the occasion at Alamo Drafthouse Cinema, Wood arrived in a flowing black gown. Her double-breasted style featured pointed lapels, as well as two rows of front buttons. Thin gray pinstripes covered the piece, giving it a slick vintage effect.

When it came to shoes, the “Practical Magic” actress was sharp in a set of strappy sandals. Her style featured black upper straps across its ankle and toes, along with thin soles. The style was complete with heels, likely in a block or stiletto silhouette totaling at least 4 inches in height — as seen in their traditional silhouettes. The versatile pair provided a clean base for Wood’s ensemble, allowing her gown to take center stage.

PHOTOS: Discover high heel silhouettes from the 1920s to today in the gallery.