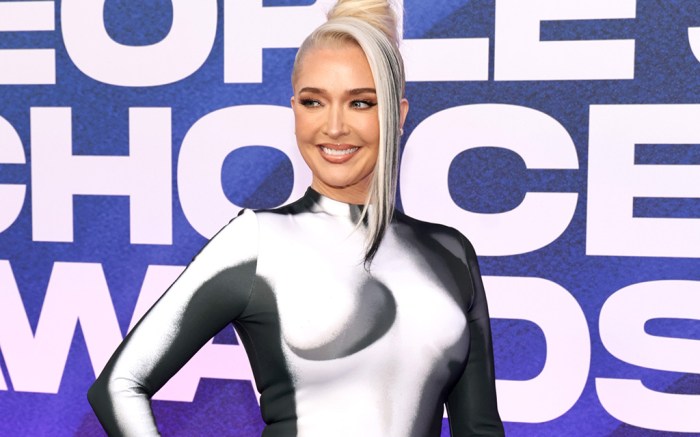 Erika Jayne graced the red carpet at the 2022 People’s Choice Awards in Santa Monica, Calif., tonight clad in an illusive garment that gave the “Pretty Mess” songstress a “nude” appearance.

The risky maxi style from Balmain’s fall 2022 collection had long sleeves and a mock neckline. Its black and white graphic print was designed as the silhouette of a female body, creating an edgy look.

The “nude”-illusion dress has become increasingly popular within the last few years.

The singer accessorized with a gold cuff and an assortment gold hoops and studs to match. The reality star punctuated her look with a white manicure and a swooping side bang, her white-blond tresses dipped in black at the very ends for a grungier appearance. The rest of Jayne’s hair was slicked back and up into a messy bun.

On her feet, the “Real Housewives of Beverly Hills” star opted for black heeled sandals with thick glossy straps. The heel itself was thin and long, around 4 to 5 inches, while the toes were rounded. The shoe style is a versatile and approachable choice embraced by many celebrities on red carpets, Jayne included.