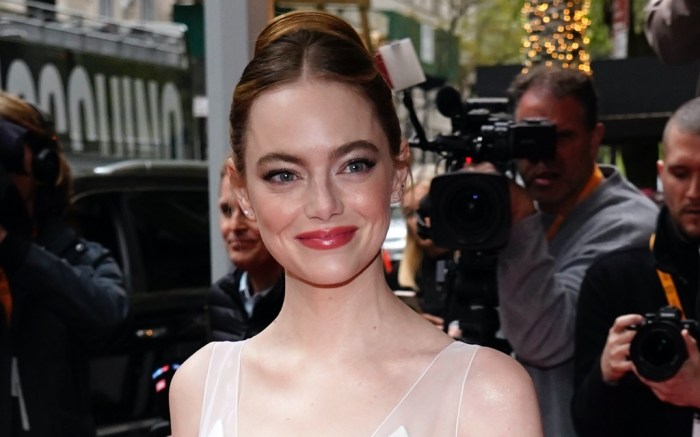 Emma Stone looked straight from the ’20s in her latest look for the Met Gala in New York City.

While leaving the Mark Hotel, the “Easy A” actress posed and shimmied on the outdoor red carpet in a white minidress. The glamorous piece featured thin straps with a deep neckline. Giving the simple piece a burst of drama was a swinging feathered hem, featuring sprays of feathers accented with sparkling crystals. Stone’s flapper-worthy outfit was complete with a classic knotted hairdo.

When it came to shoes, Stone slipped on a matching pair of Louis Vuitton pumps. Her style featured white uppers with square toes and thick block heels, totaling at least 3 inches in height. Boosting the style further were ankle straps crafted from metallic chain links, giving her outfit a burst of edge from Nicolas Ghesquiere.

Stone’s ensemble was an homage to the glamorous flapper dancers and nightlife fixtures in the 1920’s, fitting into the “In America” theme with a historical twist.