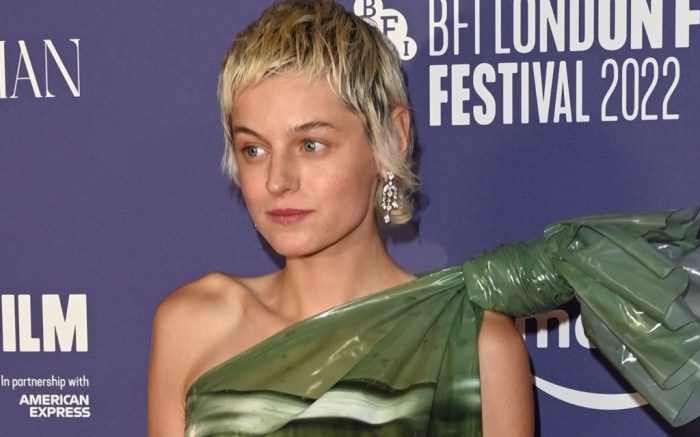 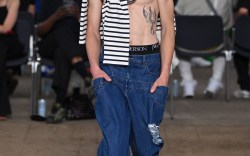 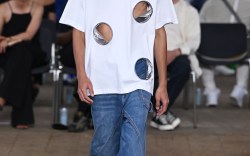 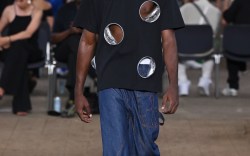 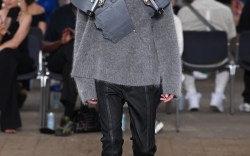 Emma Corrin brought viral surrealist style to the final night of the 2022 BFI London Film Festival at the European premiere of “My Policeman” on Saturday. The historical romance drama, which Corrin stars in alongside Harry Styles and David Dawson, premieres on Oct. 21.

Arriving on the red carpet at the Royal Festival Hall in London, the “Crown” star wore a whimsical J.W. Anderson outfit, styled by Harry Lambert. Their glossy minidress — a viral number from Anderson’s viral spring 2023 womenswear collection, shown last month during London Fashion Week — featured a bubble-style hem and one-shoulder silhouette with a large knotted strap. With numerous shares of green and an enlarged print of a goldfish underwater, the dress was designed to mimic the appearance of a goldfish in a plastic bag. Corrin’s surrealist outfit was complete with Cartier diamond drop earrings for a glamorously elegant finish.

The “My Policeman” premiere marks Corrin’s latest return to the red carpet. In recent months, the star has made waves from the aforementioned “My Policeman,” as well as  Netflix’s “Lady Chatterley’s Lover” and the upcoming play “Orlando.” In particular, they made waves in a black Miu Miu bodysuit with sheer tights and leather pumps at the 2022 Toronto International Film Festival for the official “My Policeman” premiere. This year, Corrin was also tapped by Miu Miu to star in its spring and fall 2022 campaigns.

The BFI London Film Festival celebrates the year’s top upcoming films and their accompanying performances. Held from October 5-16, the 2022 occasion includes screenings and premieres for numerous films, including “The Good Nurse,” “My Policeman,” “Roald Dahl’s Matilda the Musical,” “The Whale” and “Till.” The event also features a range of celebrity appearances, which have already included Jennifer Lawrence, Timothee Chalamet, Jessica Chastain, Eddie Redmayne, Salma Hayek and Florence Pugh.