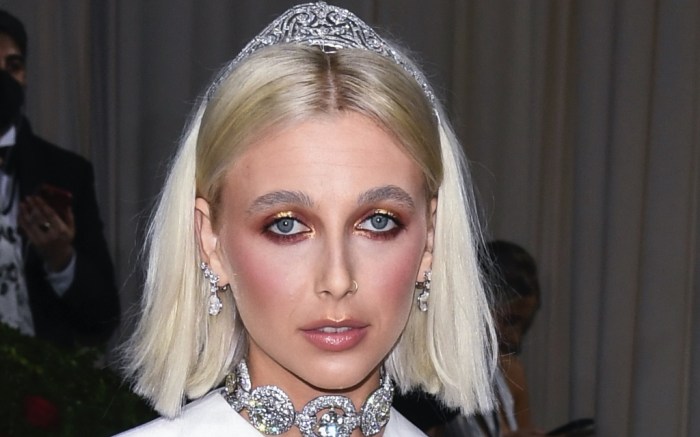 Emma Chamberlain took a fashion risk to debut her new hair color at the Met Gala in New York City.

While arriving at the Metropolitan Museum of Art tonight, the YouTube star posed in a custom Louis Vuitton outfit while debuting a new platinum blond hairstyle. Her ensemble featured a slim-fitting white skirt with a long train, as well as a cream crop top with a smocked neckline and puffed sleeves. Completing her ensemble was a sparkling diamond necklace, drop earrings and tiara by Cartier.

For footwear, Chamberlain’s heels were hidden beneath her Vuitton skirt. However, it’s likely she wore a metallic, neutral or coordinating pair of heels or boots from the brand for the occasion. Similar styles were spotted on other stars dressed by the French label, including Emma Stone, HoYeon Jung and Phoebe Dynevor.

Click through the gallery to more Met Gala 2022 arrivals.