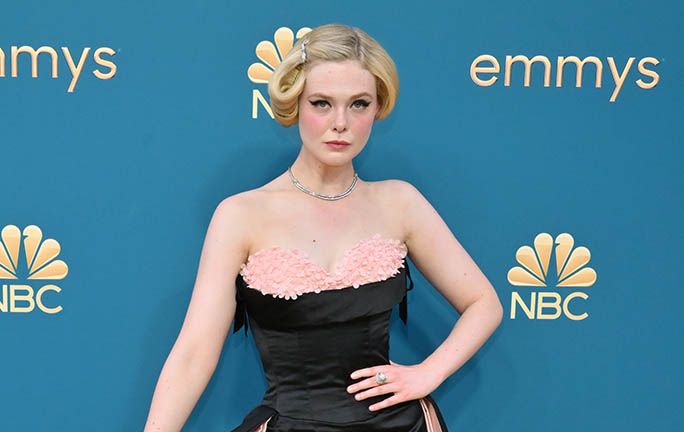 The stars are aligning at the 74th Primetime Emmy Awards held at the Microsoft Theater in Los Angeles tonight. Elle Fanning made her Emmy’s debut in bold fashion. The actress is nominated for Outstanding Lead Actress in a Comedy Series for her role as Catherine in “The Great.”

Fanning stepped onto the red carpet in a strapless black sheath gown that featured a sequined pink bust and a pale blush-toned train. The look was custom made by “The Great’s” costume designer, Sharon Long and channeled Old Hollywood with its dramatic silhouette.

For glam, “The Girl From Plainville” star parted her hair to the side and pinned it under, which created a tight curl. To further elevate the moment, Fanning accessorized with a sparkling choker and chunky diamond ring.

When it came down to the shoes, the entertainer completed her outfit with platform sandals. The shoe style had a chunky outsole and a small open-toe and was set on a thin stiletto heel. The platform shoe trend is one of the easiest styles to incorporate into any wardrobe. Post-pandemic, platform shoes have emerged as one of the most popular footwear styles. The dramatic heel easily adds flair to any outfit.

The 2022 Emmy Awards celebrates the top performances and programs in television. This year’s ceremony, held at the Microsoft Theater in Los Angeles, will be hosted by Cedric the Entertainer. HBO’s “Succession” is leading the annual event’s 2022 nominations with 25 nominations, followed by “Ted Lasso” (20), “The White Lotus” (20), “Hacks” (17) and “Only Murders in the Building” (17).

PHOTOS: Discover more celebrity arrivals on the red carpet at the 2022 Emmy Awards.