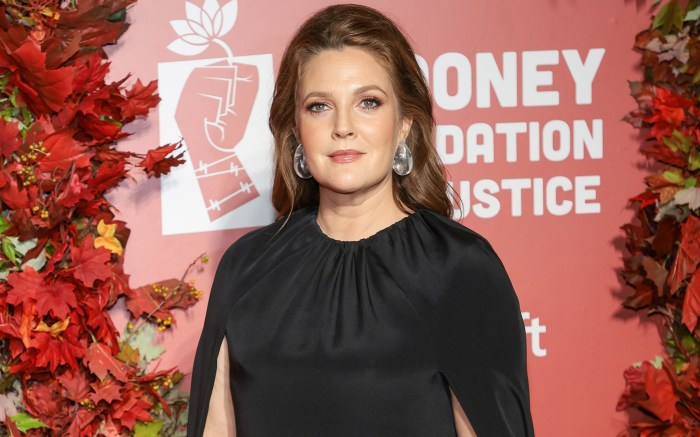 Barrymore wore a black crew neck dress with a matching cape detail that gathered around the neckline. The floor-length dress was a part of a previous Brandon Maxwell collection.

She paired the look with a leather clutch with a gold handle. The daytime talk show host completed the look with oversized clear jewelry set from Patricia Von Musulin. Barrymore sported a set of bangles, a matching ring, and hoops from the jeweler.

This classy look was put together by Lee Harris. The stylist is the mastermind behind all of the actress’ past looks.

Barrymore’s light brown hair was lifted into a voluminous soft wave style and her makeup was kept minimal with a light eye look and a mauve lip. Barrymore partnered with the cosmetics company Charlotte Tilbury for her glamorous look to the award ceremony. The beauty team behind this look are hair stylist Daniel Howell and makeup artist Christina Valerie. The two have also worked with Salma Hayek, Bella Hadid, and Kendall Jenner.

George Clooney and his wife Amal Clooney hosted the first ever Justice Albie Awards last night at the New York Public Library. The award ceremony is named after Albie Sachs, a South African judge who was imprisoned for his fight against segregation. They honored journalists, human rights leaders and other global justice like Sachs who take great risks for the work they produce.