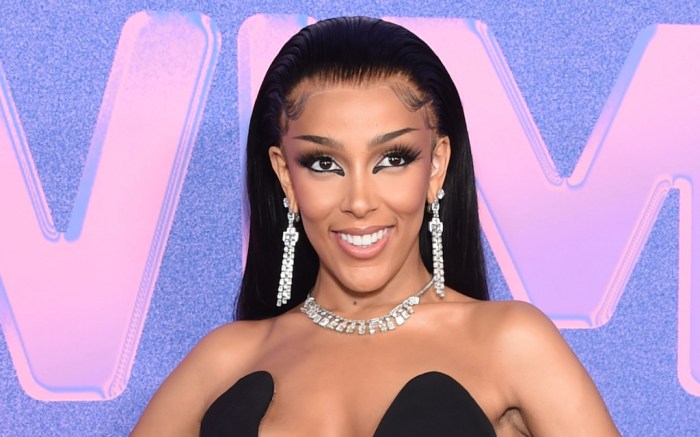 Doja Cat brings a modern edge to Hollywood glamour for her latest red carpet outfit. The “Get into It (Yuh)” rapper was spotted on the red carpet for the Billboard Women in Music Awards in Inglewood, Calif. on Wednesday night. The event included performances from Summer Walker, Saweetie and Doja Cat herself.

For her red carpet look, the “Woman” singer showed up in a strapless black dress from Carolina Herrera that had a plunging deep-v neckline bodice that featured a peplum of fabric layered over a black tulle skirt placed in the middle of the garment that added volume to her chic attire. The piece came to her ankles and gave Doja Cat’s ensemble a lot of movement.

Doja Cat made a showstopping statement with her accessories. Around her neck, she wore a chunky diamond necklace and diamond chandelier earrings that glimmered and sparkled in the camera flashes. For hair, she pulled her black tresses into a sleek straight-back appearance that tied her elegant moment together seamlessly.

To ground everything, Doja Cat wore a pair of sharp black pointed pumps that had a silver metallic platform sole. The shoes also had a transparent ankle strap on each shoe, and her heels had a height of approximately four inches.

Click through the gallery to see more red carpet arrivals.