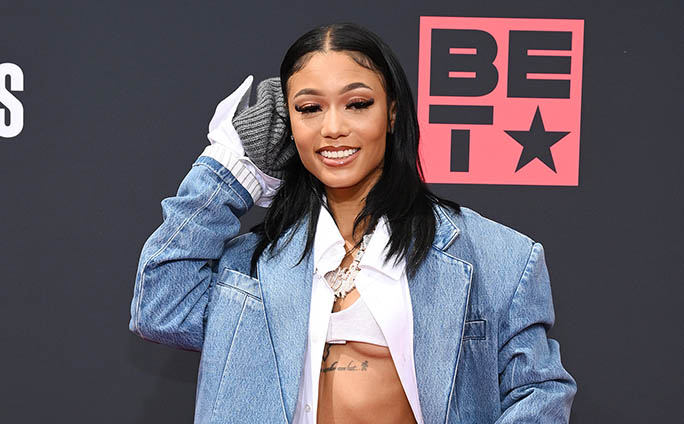 The BET Awards have returned to the Microsoft Theater in Los Angeles on Sunday. And the red carpet is already heating up. Coi Leray was among the many faces to step out for culture’s biggest night.

The “No More Parties” hitmaker put an innovative twist on a Canadian tuxedo by Alexander Wang. The chart topping rapper wore an oversized denim blazer over a crisp white button-down shirt. The top featured wide cuffs, which were complemented with slouchy grey knit sleeves. Leray continued to layer ensemble with a tiny white bralette and a denim mini skirt.

To let her look do all of the talking, she styled parted her hair in the middle and styled it straight. For glam, The “Blick Blick” artist went with neutral makeup and a glossy pout. She kept her accessories simple, only adding a blinged out choker necklace.

Leray continued with a Y2K aesthetic by finishing off her outfit with thigh-high denim boots. The slouchy style had a slightly pointed toe and a circle patch on the calves. Often considered the sexiest boot silhouette, thigh-high boots most often stop mid-thigh for a leg-climbing look. Commonly made of leather or suede, thigh-high boots are most often worn with short skirts or shorts, dresses featuring high slits or very tight-fitting pants.

Click through the gallery to see more stars on the red carpet at the 2022 BET Awards.