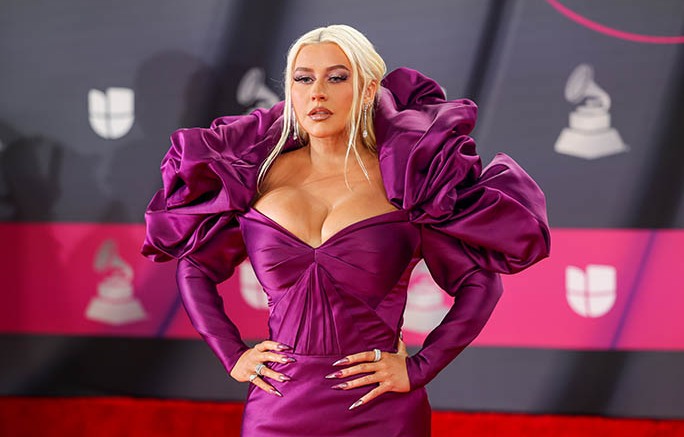 Christina Aguilera was a show-stopper at the 2022 Latin Grammy Awards in Las Vegas on Thursday, where she accepted an award for Best Traditional Pop Vocal Album for “Aguilera.” The star-studded event celebrated the best musical releases and recognized outstanding achievements in the Latin music industry.

Aguilera looked regal while posing on the red carpet. The pop superstar lead the way in a purple gown by Zac Posen. The eye-catching piece featured a dramatic ruffled collar that draped along her shoulders, fitted sleeves and a plunging neckline. The garment also included a sculpting skirt and modest train.

To place more emphasis on her look, the “Genie In a Bottle” hitmaker accessorized with dangling diamond earrings, chunky diamond rings and pointy metallic nails. For glam, Aguilera went with shimmering lavender eyeshadow and a glossy pout. She pinned her hair back and let a few strands frame her face.

The length of the songwriter’s gown didn’t allow for a peek at her shoe choice, but it would be no surprise if she tied her look together with a pointy silhouette, strappy sandals or platform heels. Aguilera favors footwear that takes her outfits above and beyond.

The 2022 Latin Grammy Awards celebrated the best musical releases and recognized outstanding achievements in the Latin music industry. Held on Nov. 17 in Las Vegas, the ceremony was hosted by singers Anitta, Luis Fonsi, Thalia and Laura Pausini. Marco Antonio Solís, was honored with the Latin Grammy’s Person of the Year Award and Bad Bunny lead the night with ten nominations. Rosalía also received the award for Album of the Year and 95-year-old singer Angela Alvarez accepted the award for Best New Artist.