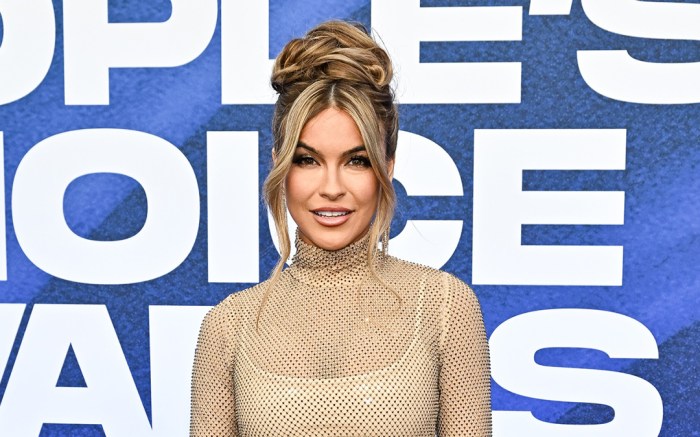 Chrishell Stause glistened in golden and neutral hues on the red carpet on Tuesday in Los Angeles at the 2022 People’s Choice Awards. The “Selling Sunset” star, who is in the running for the Choice Reality Star of the Year Award, arrived in a semi-sheer LaQuan Smith dress from the designer’s fall 2022 ready-to-wear collection.

Engulfed in gems from top to bottom, the dress had ruched detailing along its turtleneck silhouette and slinky sleeve cuffs. Given the looks see-through aesthetic, she paired the dress with a nude spaghetti-strapped leotard.

The opulent theme continued with her seemingly ombre-glazed manicure and tassel drop earrings. Stause furthered the focus toward the gleaming gown with a high bun accented with her signature face-framing layers. The hairstyle was done by Bradley Leake.

She took to her Instagram story to thank her fans: “People’s Choice, here I come. Thank you to everyone that voted. I have no expectation of taking anything home tonight but it’s always such an honor and flattering to be nominated in the conversation with so many awesome people.”

She was joined on the carpet by her “Selling Sunset” costar Emma Hernan, a latecomer on the reality TV show who joined the cast of real estate executives taking over Los Angeles in Season 4. The show itself is also nominated for the Reality TV Show of the Year Award.