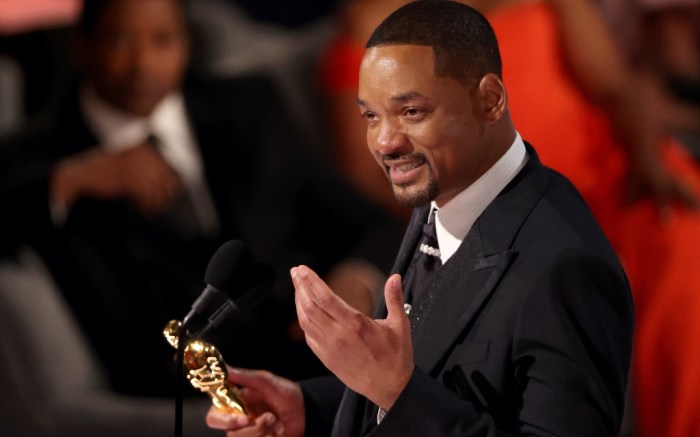 Chris Rock and Will Smith were sharply dressed tonight at the 2022 Oscars at the Dolby Theater in Los Angeles.

Rock arrived onstage in a blue velvet tuxedo jacket and coordinating trousers to present the award for Best Documentary. Paired with a white suit, black bow tie and glossy black brogues, the comedian’s look was both dapper and fitting within classic evening dress codes.

Smith was also sharply dressed in a black Dolce and Gabbana 3-piece suit, complete with a matching tuxedo jacket and vest, over a white shirt. Completing his ensemble were sparkling tie jewels by Cartier.

However, the evening took a dramatic turn once Rock made a joke at the expense of Jada Pinkett-Smith regarding her hair — not keeping in mind her alopecia diagnosis. Smith arrived onstage and promptly slapped Rock in the face, creating one of the evening’s most viral moments. The occasion elicited numerous reactions from celebrity members of the audience, which have now become viral memes — specifically, those from Lupita Nyong’o, Beyoncé and Nicole Kidman.

Soon afterwards, Smith won the Oscar for Best Actor for his portrayal of Richard Williams — father of superstar tennis players Serena and Venus Williams — in the drama “King Richard.” During his acceptance speech, Smith highlighted the importance of protecting loved ones, thanked the Williams family and apologized to those in attendance — as well as the Academy — for the prior moment with Rock.

“I am overwhelmed by what god is calling me to be and do in this world… I’m being called on in my life to love people and to protect people and to be a river to my people,” Smith said. “It’s not about winning an award for me, it’s about being able to shine a light on all the people… the entire cast and crew of King Richard and Venus and Serena and the entire Williams family. Art imitates life. I look like the crazy father, just like they said about Richard Williams, but love will make you do crazy things.”