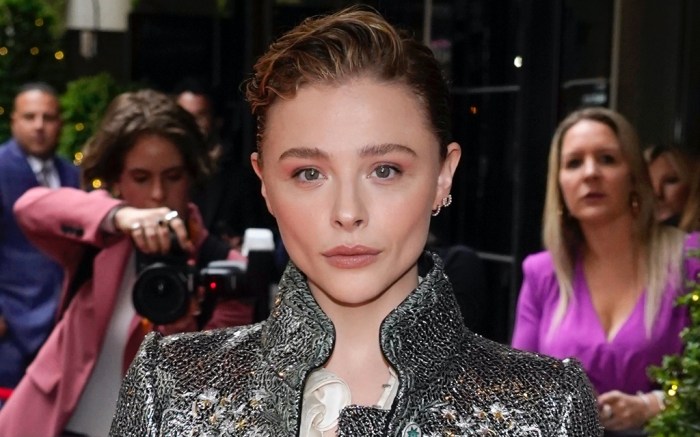 Chloe Grace Moretz boosted a regency-esque outfit with slick heels to match for the 2022 Met Gala in New York City.

While leaving the Mark Hotel, Moretz posed for paparazzi in a set of pale pink trousers and a plunging ruffled crop top, both by Louis Vuitton. Topping the outfit was an ornate metallic silver coat, featuring long tails and sleeves with millitary-esque curved lapels. The ensemble was an homage to the Regency era of the 1800s, while remaining modern through its materials, color palette and silhouettes.

Furthering Moretz’s militaristic inspiration was a low ponytail style, similar to menswear hairstyles of the era. However, the “Kick Ass” actress’ was decidedly more modern; hers was crafted by hairstylist Gregory Russell using Pureology products, structured with pins and tied with a black grosgrain ribbon for an elegant finish.

For footwear, Moretz opted for a set of sharp Vuitton pumps. The pointed-toe style featured slick metallic silver uppers. Completing the pair were stiletto heels, totaling 3-4 inches in height — adding a modern finish to Moretz’s vintage-inspired outfit. Her ensemble’s 1800’s references also clearly paid tribute to the regency era, providing a historical a take on the 2022 exhibit’s “In America” theme.

Click through the gallery to see more Met Gala 202 arrivals.