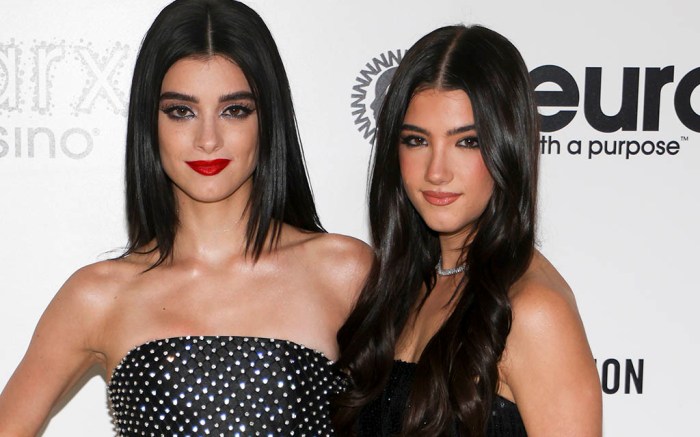 The influencers sparkled together in sleek evening gowns, including TikTok star Charli in a strapless sequined black Prada dress paired with Le Silla pumps. Her sister Dixie embraced a similar silhouette in black by Khoon Hooi that incorporated mesh netting with crystals, as well as hidden Jimmy Choo pumps.

Model Roz was blindingly bright in a two-piece set from Jean Louis Sabaji’s spring ’22 collection that included a crystal-embroidered crop top and pencil skirt, of which its hemline covered her Loriblu shoes. Earrings and rings by Sydney Evan added shimmering glamour.

Singer-actress Carpenter shimmered in a sequined halter-neck Alexandre Vauthier dress with a high slit that gave way to her height-boosting platform sandals in black.

The social media stars aligned for an Instagram video at the soiree, where they shimmered together at Elton John’s benefit among a boldface roster of names, including Lady Gaga, Heidi Klum and more.

The evening concluded with a range of similarly celebrity-packed after-parties, hosted by Vanity Fair, Beyonce and Jay-Z and more.

The 2022 Academy Awards — also known as the Oscars — celebrate the top talents across the film industry. This year’s event, held at the Dolby Theater in Los Angeles, was hosted by Amy Schumer, Regina Hall and Wanda Sykes.

See the stylish red carpet arrivals from the 2022 Oscars.