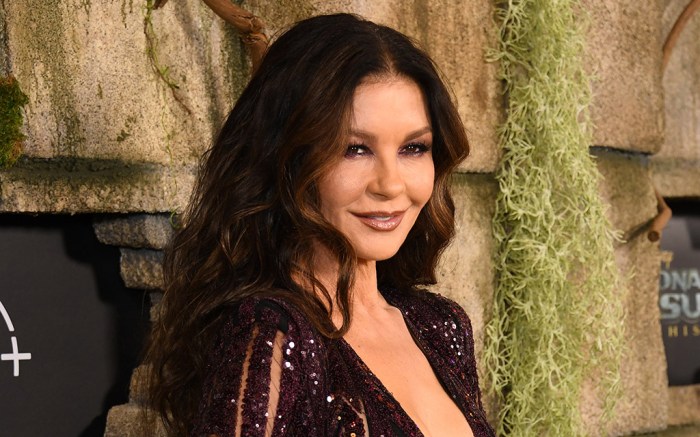 Zeta-Jones’ ensemble consisted of a flared jumpsuit made out of a deep burgundy iridescent sequined fabric, featuring a daring plunging neckline and cutout detailing. The sparkling garment was layered overtop a black bodysuit that gave the “The Mask of Zorro” actress extra coverage.

Complete with a bell-bottom style hem and an eye-catching sheen, the designer outfit was paired with diamond-encrusted rings and dazzling hoops to match. Each sparkling accessory she sported was from Nicole Rose Jewelry and Yeprem. Zeta-Jones styled her dark brown tresses in a middle part with loose curls throughout while her makeup mirrored the striking burgundy hue in her jumpsuit.

Jumpsuits have a unique history. They were first created in the early 1900s for people who were, yes, literally jumping out of planes. The style first transferred over to the fashion scene in the 1930s, but was mostly utilitarian (a la Rosie the Riveter) for several decades. It wasn’t until the 1960s that jumpsuits caught on in casual fashion, dominating style trends until the 1980s. After a hiatus from popular fashion, jumpsuits came back again in the early 2000s, especially catching on in formalwear.

Although they were covered thanks to the eclipsing hem of her jumpsuit, the Welsh actress was wearing Sarah Flint heels according to her stylist Kelly Johnson. Zeta-Jones often wears sleek shoes on the red carpet. Her attire for formal occasions is usually finished with pointed pumps or strappy sandals, hailing from top brands including Christian Louboutin. The actress has also led her own apparel and shoe line, Casa Zeta-Jones, since launching it in 2017.

“National Treasure: Edge of History” is an upcoming television series developed by Disney+ based on, and a continuation of, the “National Treasure” film series. It is set to premiere on Dec. 14.