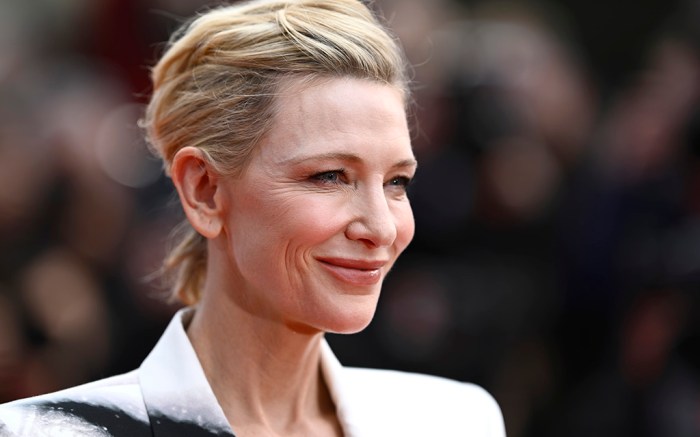 Cate Blanchett joined her fellow cast members on the red carpet for the world premiere of Guillermo Del Toro’s “Pinocchio” during the 66th BFI London Film Festival at The Royal Festival Hall today. Blanchett repped an Alexander McQueen look that was fresh off the runway, the actress pairing the outfit with elevated footwear.

The thespian suited up in a tailored double breasted blazer with a risky plunging neckline and an intense eye motif plastered on the front trailing down the sleeve and on the star’s pant leg. The trousers, like their blazer counterpart, were mainly white and straight legged, the style slightly basic in contrast with the structured top half.

Women’s suits have greatly evolved over the years, however their origins can still be seen in the suits worn today. The classic style is tailored two-piece designs made specifically for a woman’s form. Women’s suits often feature a skirt or fitted pants with a matching blazer. The style emerged in the early 1900s during the Suffragette Movement, but didn’t hit peak popularity until the 1980s as more women entered the workforce.

Blanchett channeled the ’90s, slipping into black platform sandal reminiscent of sunny summer days and warmer weather. The style consisted of thick straps crossing over the tops of the thespian’s feet, securing them in place, accompanied by thick elevated platforms that added a couple of extra inches to Blanchett’s look.

Guillermo Del Toro’s “Pinocchio” is a darker take on the fairytale classic with a star-studded cast of characters about a father’s wish that magically brings a wooden boy to life in Italy, giving him a chance to care for the child. The film is set to release in select cinemas from Friday, Nov. 25. It will then become available to stream on Netflix just two weeks later on Friday, Dec. 9.