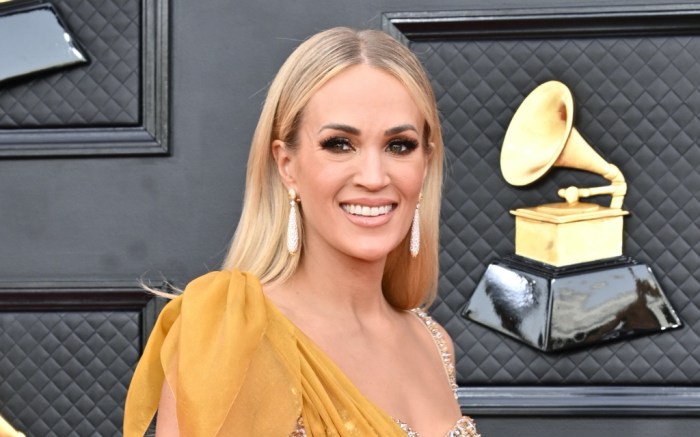 Carrie Underwood certainly knows how to make a statement.

The country singer attended the 2022 Grammy Awards on Sunday night in Las Vegas. Not only is she performing, but she was also nominated for two awards.

Underwood was joined by her husband, NFL player Mike Fisher ahead of the show on the red carpet. She wore a gold ombre dress with a crystal bodice from Dolce & Gabbana. Her dress featured a one-shoulder design with a sash-like effect in the same gold tulle as her skirt. She added crystal drop earrings and rings to the dramatic look.

Though her oversized ballgown skirt concealed her shoes, we can safely assume Underwood wore a pair of towering heels, as she typically does at other formal events. In the past, she has been known to wear flashy styles that feature studs, metallic tones and crystals. Earlier this month, she wore a pair of crystal-embellished strappy sandals to the ACM awards.

The 2022 Grammy Awards air tonight at 8 p.m. ET on CBS, honoring excellence and outstanding achievement in the music industry for the year. Hosted by “The Daily Show’s” Trevor Noah, the show takes place in Las Vegas at the MGM Grand Garden Arena. Up for top awards this year are singer-songwriter Jon Batiste, who leads the Grammy nominations with 11 nods; Doja Cat, H.E.R. and Justin Bieber not far behind with eight nominations each. Performers include J Balvin, John Legend and more.

Click through the gallery to see all the red carpet arrivals from the 2022 Grammy Awards.