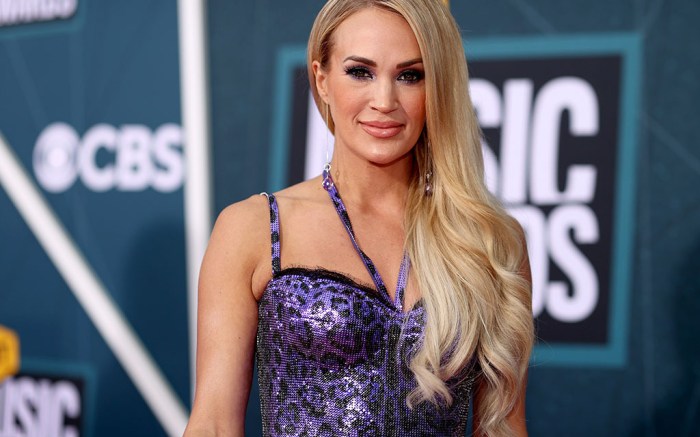 Carrie Underwood’s glamorous style took a turn for the sleek at the 2022 CMT Awards on Monday night.

The “Denim & Rhinestones” musician arrived on the red carpet with husband Mike Fisher, wearing a purple chainmail minidress covered in black leopard print. The slick number featured thin shoulder and halter straps to create a cutout silhouette, with added sultriness from black lace trim and a side slit. Completing Underwood’s ensemble was a black clutch covered in crystals, as well as sparkling diamond drop earrings and rings embellished with purple stones.

For footwear, the “If I Didn’t Love You” singer went sky-high in a set of towering platform heels. The style included glossy black patent leather uppers in a pointed-toe silhouette, featuring a thick platform sole. Completing the pair, which complemented her dress’ print to create a streamlined look, were stiletto heels totaling at least 5 inches in height.

The CMT Awards celebrate the top music videos and television performances by country musicians. The 2022 ceremony, broadcast from Nashville, will be hosted by Kane Brown, Anthony Mackie and Kelsea Ballerini. This year’s event also includes numerous star-studded performances from Carrie Underwood, Miranda Lambert, Keith Urban and more. Nominations are led by Brown with four — including video of the year — as well as Ballerini, Mickey Guyton and Cody Johnson with three each. The show will be airing live from CBS and streaming in Paramount+ at 8:00 p.m. EST.